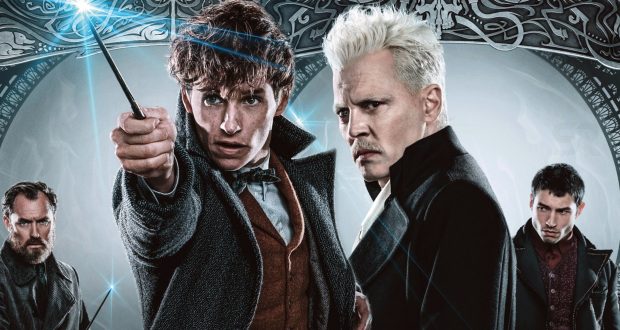 PICK A SIDE! From left – Jude Law, Eddie Redmayne, Johnny Depp and Ezra Miller in The Crimes of Grindelwald.

Film review: Fantastic Beasts – The Crimes of Grindlewald (12A)

If the original Fantastic Beasts offering laid the foundations for the newest corner of J.K. Rowling’s wizarding world, The Crimes of Grindlewald certainly fleshes out the wider story.

Picking up shortly after the conclusion of 2016’s Fantastic Beasts and Where To Find Them, the second slice of the five-part series introduces a number of key characters and sets the tone for the final three films.

With Rowling on screenwriting duties and David Yates – who helmed six of the Harry Potter films – back in the directors chair, this sequel is full of intriguing new characters, boasts an impressive villain and does a sound job of ushering a ‘Potterverse’ legend back into the fray.

Kicking off with a visually stunning sequence that re-introduces us to Johnny Depp’s titular villain Grindelwald, the stakes are clearly higher this time around.

Being the chief baddie in a Potterverse film was always going to be a tough task after Ralph Fiennes’ notable outing as Voldermort, but Depp’s Grindelwald marks a real return to form for the legendary actor.

Creepy, compelling and ghostly with his haunting mismatched eyes, he’s a fascinating character that should prove to be a big success moving forwards.

Anyway, it’s not all about Depp and his new look.

Once again, the story is led by Eddie Redmayne’s Newt Scamander.

He’s joined once more by Tina (Katherine Waterston), Jacob (Dan Fogler), and Queenie (Alison Sudol), who return from the original.

This time, however, the onus is on Newt to pick up his wand and join the battle against Grindelwald – who believes that wizards and witches shouldn’t have to co-exist with humans – with 1920s Paris the chief setting.

Naturally, Newt would rather “not pick a side” and spends his time with his Fantastic Beasts.

But, when Jude Law’s Albus Dumbledore asks him to go to Paris in a bid to track down the mysterious Credence (Ezra Miller), he has a change of heart.

Law impressed me as a character that is perhaps the most iconic in the Potter films, but you sense there is much more to come from him.

There is also an intriguing link between the master wizard and Grindelwald, but I’ll not spoil that surprise.

Once again, Credence is a central figure here. His origins are much discussed by both sides, but you’ll find it difficult to care about him all that much.

He’s accompanied for much of the film by the much-anticipated debut of Claudia Kim’s Nagini. In truth, there’s nothing much for fans to get too excited about there, barring the obvious connection to Voldemort.

It should be said, however, that her transitions from human to snake are pretty impressive.

Of the other new faces, Zoe Kravitz’s Leta Lestrange is perhaps the best.

Again, you’ll recognise the surname if you’re a fan or Rowling’s work – and she’s as mysterious as you’d expect.

As you can probably tell, the cast is loaded with talent.

That, coupled with the impressive visuals, makes for a fine experience at the cinema, especially in 3D.

If you’re a fan of the Harry Potter films, it’s probably a safe bet to assume that you’ll lap this up.

It’s another strong offering in the popular wizarding world that sets up the next film superbly.

PARENT AND BABY SHOWING
10am (Wed) – Bohemian Rhapsody (12A)