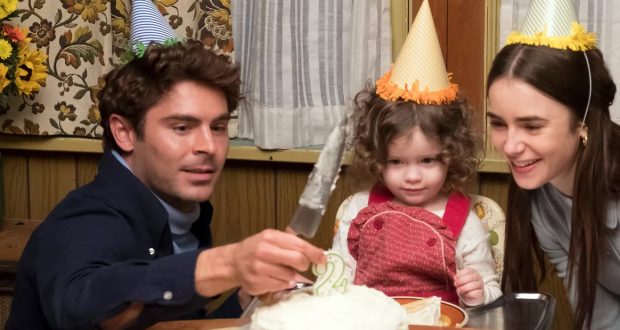 It’s fair to say that the film and television industry has become a little bit obsessed with serial killers over the past few decades.

Based on the heinous crimes of notorious American serial killer Ted Bundy, director Joe Berlinger shows us the man through the eyes of his ex-girlfriend Elizabeth “Liz” Kloepfer (Lily Collins).

Played by an on-song Zac Efron, we first meet Bundy during his time on death row.

Clearly at odds with Liz, we’re soon transported back in time to their night they first met in a 1969 college bar.

With Liz being a single mum, it doesn’t take much of Bundy’s trademark charm to get himself into her good graces.

The next morning he’s up looking after her daughter and making them all breakfast. That, coupled with his obvious good looks, make him an apparent good catch for Liz.

Naturally, we as the audience know better, but it doesn’t take long for Bundy to charm us too.

We’re never shown his alleged crimes and are even sold the notion that he was simply an innocent man being fitted up by the authorities.

It’s a brave direction in which to take the film, given that – at times – it almost feels like Bundy is being hero-worshipped.

This kind of approach would have certainly worked better in a film that isn’t about a man known to have killed at least 30 women, but that’s not to say it’s a total bust.

That’s largely down to a strong cast, led superbly by Efron – who effortlessly channels Bundy’s charm while also offering subtle hints of his sadistic nature.

Given his past roles, this comfortably represents his best performance on the big screen yet.

Also impressing is Collins, who shoulders much of the screentime. Liz’s arc is a tough watch, with her only crime being that she fell in love with the wrong man.

It’s an emotional turn from the Brit and she does a great job of it.

Once the film moves on from Liz’s struggles, we’re also treated to enjoyable performances from John Malkovich as Judge Edward Cowart and an almost unrecognisable Kaya Scodelario as the Bundy-obsessed Carole Anne Boone.

Malkovich is on typical scene-stealing form in his relatively small role, with the interplay between him and Efron in the courthouse being one of the best acts of the film.

Likewise, Scodelario is both creepy and downtrodden as Carole, who plays an important role in the second half of proceedings.

I can’t tell you that Extremely Wicked, Shockingly Evil and Vile is a great film, but it is certainly different.

Packed full of strong performances, there’s much to admire here.

It was disappointing to see it shy away from showing Bundy’s crimes and not give any screentime to his many victims, but there is at least method to this madness.

If you’re a Sky Movies subscriber, you can watch this now in the comfort of your own home – which is another plus. If not, it’s still worth your time at the cinema.