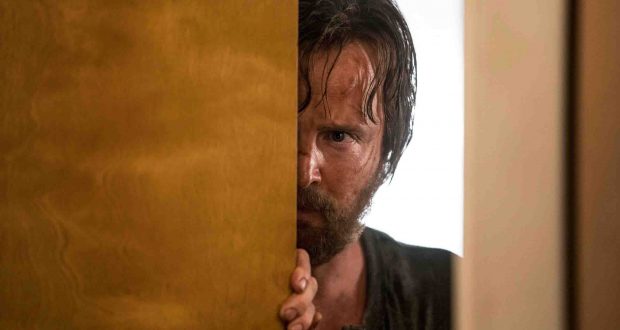 BROKEN MAN: Aaron Paul is back as Jesse Pinkman in El Camino.

When it comes to naming the best TV series ever made, I’d suggest that Breaking Bad should always be in the discussion.

The Netflix show ended with some of the greatest episodes I’ve ever seen and managed to find that sweet spot of being satisfying while not outstaying its welcome.

But, while the fate of main character Walter White (Bryan Cranston) was decided, it was less obvious what lay in store for the much-loved Jesse Pinkman (Aaron Paul).

So, while I was happy that Breaking Bad ended perfectly, can you ever have too much of a good thing?

El Camino (which will probably be the only Breaking Bad movie) answers that question with two more hours of Vince Gilligan-inspired magic.

Serving more as an epilogue to the main series than a stand-alone film, it doesn’t damage the show’s legacy, gives a Jesse a worthy ending and also serves up a number of cameos from familiar faces that don’t ever feel forced.

Amazingly, it’s now six years since we saw Jesse (slight spoiler ahead) escape his Neo-Nazi meth facility prison, but Paul slips back into the character like he’s never been away.

This is, however, an incredibly fragile version of a character that was often likeable and bubbly despite being mentally scarred by his past crimes.

Through a series of flashbacks we’re shown what he had to go through during his time as a meth-cooking prisoner and discover why he’s clearly suffering with some form of PTSD.

But El Camino is also a coming-of-age story for Jesse, as we see him grow from a lost boy into a man who knows what he wants.

Of course, he’s also on the run from the authorities after the events of the series’ finale.

That’s expertly portrayed by some of the camera work, which helps make this Breaking Bad add-on feel both claustrophobic and tense almost all of the time.

As for the flashbacks, I’ll not spoil any of the guest appearances.

But by far the most prominent (and indeed most harrowing) comes from a character that the past six years haven’t been so kind to appearance-wise, making it a little hard to believe we’re operating in the same timeline as the show.

That small gripe aside, there’s nothing that fans of the show will be disappointed with here.

The ending feels quite fitting while also being in-keeping with what we know of the Breaking Bad world, while Jesse’s actions never feel out of character. Indeed, it almost feels like we’re dealing with deleted scenes from the main show, which isn’t meant to be a negative.

If you’re thinking of watching Breaking Bad for the first time or have no inclination of watching the series, El Camino will fall flat.

But for fans, this is absolutely essential viewing.