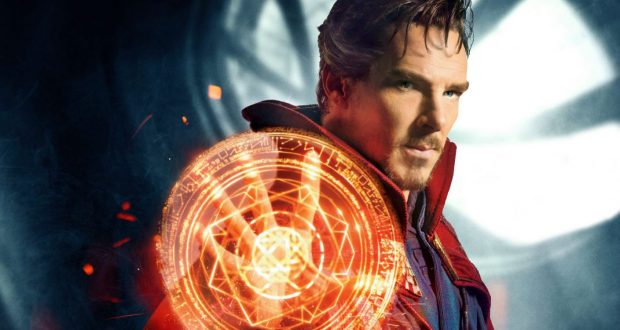 MADE FOR THE ROLE: Benedict Cumberbatch is expertly cast by Marvel as Doctor Strange.

Those of you that have read my film reviews over the past few years will know that I’m a sucker for a superhero movie.

I’m also particularly fond of the Marvel Cinematic Universe (MCU) and the now 14 films that co-exist in the same timeline.

Doctor Strange is the first of these films to be a little off my radar, as I wasn’t aware of his comic book backstory or the characters I’d be spending the first of many hours with.

Directed by Scott Derrickson (The Exorcism of Emily Rose), Doctor Strange is an origin story for the Sorcerer Supreme, who is expertly portrayed by Benedict Cumberbatch (Sherlock).

Now, origin stories (especially Marvel Studios ones) usually follow the same formula, which I imagine will be a bone of contention for some. Stephen Strange’s journey does follow a pretty formulaic route, but the magical element of the story helps it stand out from the crowd.

A talented (and arrogant) neurosurgeon, Strange’s life changes forever when a car crash leaves his hands mangled. And, when medical science fails him in his bid to recover, he shuns those who love him – mainly Rachel McAdams’ Christine Palmer – and goes in search of a mythical place called Kamar-Taj.

He’s told that he could find a spiritual way of healing himself, but instead finds the Ancient One (Tilda Swinton – The Beach) and her team of sorcerers, including Mordo (Chiwetel Ejiofor – 12 Years A Slave) and Wong (Benedict Wong – The Martian). When The Ancient One frees Strange’s mind he must decide whether to become her newest student or to use his power to heal his own body.

With Strange showing great potential, they want him to join them in their fight against former ally Kaecilius (Mads Mikkelsen – Casino Royale), who (of course) is using his skills for the good of evil.

Saying any more would spoil what is a very enjoyable journey, but you get the gist – brilliant but arrogant man must mend his ways and become a superhero.

Aside from the excellent cast, Doctor Strange also benefits from truly stunning visuals. If the thought of the world-bending visuals from Inception – only on steroids – does it for you, you really must see this at the cinema.

Cumberbatch is an excellent choice as Doctor Strange, while Swinton and Ejiofor are also on top form.

Mikkelsen’s Kaecillius isn’t built up as well as he could be, but I thought he was a solid villain.

Overall, the amazing magic used in Doctor Strange is a very exciting development – and I can’t wait to see how he slots into the MCU alongside the likes of Thor, Iron Man and Captain America. In short, this isn’t the best Marvel film – but it might be the most beautiful.