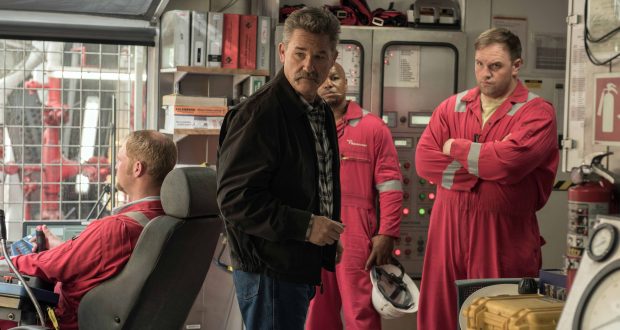 PROPHET OF DOOM: Kurt Russell's Mr Jimmy (black jacket) knows BP are up to no good in the excellent Deepwater Horizon.

I always look forward to films based on true events, especially when they are stories that genuinely need to be told.

Last year it was Everest that opened my eyes to a harrowing story which I was largely uneducated upon.

I found myself reading articles and trawling the internet for more subject matter for days after watching that one – and Deepwater Horizon falls into the same bracket.

You’ll probably recall the coverage of the major BP oil spill in The Gulf Of Mexico back in 2010. This is the story of the crew aboard the doomed drilling rig, with many of them losing their lives.

I don’t know about you, but that side of the story went under the radar as far as I was concerned.

The plot here focuses on the crew and not wider scientific details. If you’re looking for a definitive answer as to why the well which the crew were working on caused a huge natural disaster, you’ll be a little disappointed.

The narrative is simple; BP are well behind schedule when it comes to plundering what is dubbed “the well from hell” and want the job done.

Russell’s “Mr Jimmy” and his crew accuse them of taking shortcuts in not preparing the well properly – something that rings true when the well explodes and explosive gas causes the rig to go up in flames.

The destruction here is powerful and visceral. It’s the kind of event that you couldn’t imagine being caught up in, much like the above-mentioned Everest.

From a cinematic perspective, the disaster scenes are absolutely incredible and really serve up a fantastic spectacle, although the fact Deepwater Horizon is a true story does ramp up the emotional impact you’ll feel when the end credits roll.

Wahlberg is very much at home here and delivers a strong performance. Incidentally, Kate Hudson does play Williams’ wife Felicia but is a little underused.

As ever, Russell is a powerful presence as the typical wise and understanding boss you’d want in a high-pressure situation such as this.

There are plenty of other recognisable faces on the rig too, including Maze Runner star Dylan O’Brien.

Although it doesn’t explain the disaster as effectively as it could have (perhaps a longer running time and a bit more science would have helped) I genuinely see Deepwater Horizon as a film everybody should watch at some stage.

It’s an incredible example of how corner-cutting and negligence can have catastrophic consequences and shines a light on a story that was even worse than you might have initially thought.

For that alone, Deepwater Horizon is well worth your time. But, throw in some amazing action sequences and a strong cast and you’ve got a must-see film.