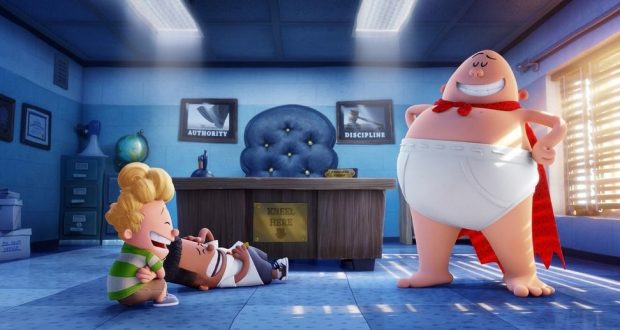 WE CREATED A MONSTER: Best buds Harrold (left) and George are always amused by the antics of Captain Underpants.

After such a great run of new films at the cinema in recent weeks, I suppose it’s apt that the sequence ended with Captain Underpants.

We’ve been spoiled by SpiderMan: Homecoming, War For The Planet Of The Apes and Dunkirk over the past month or so.

It’s fair to say that 20th Century Fox’s animated adventure isn’t in that league – but it’d also be unfair to judge it by such lofty standards too.

The two practical jokers spend their time creating comics and messing around at school, which doesn’t sit well with their grouchy (OK, verging on evil) headmaster Mr Krupp (Ed Helms).

Things take a turn when Krupp finally loses his patience with the pair and threatens to split them up in class – which would be the end of the world for the inseparable duo.

That’s when they accidentally hypnotise principal Krupp into believing that he is actually Captain Underpants, who is perhaps the dumbest superhero of all time.

George and Harrold get up to all sorts of mischief with their creation – which is initially plenty of fun for them and their classmates.

However, events take an unexpected turn when uber-villain Professor P (Nick Kroll) takes advantage of Krupp’s state and lands a job at the school.

His goal is to wipe laughter and humour from the world, which is largely due to his unfortunate name (I’ll not spoil the surprise, which is funny in a very childish way).

It’s a watered-down version of the traditional superhero formula, which works pretty well.

At the core of the story is the friendship between George and Harrold, which is the film’s beating heart.

It’s impossible not to like the duo and their amusing pranks, which are sure to be a hit with any children watching.

It’s all very light-hearted stuff, with plenty of funny moments that certainly gained a few laughs from the younger watchers at Boston’s West End Cinema.

That being said, it is pretty absurd at times (there is a point where two brains talk to each other). The film also rattles along at a pretty rapid pace and never really offers any of the usual emotional lessons these kind of movies are well known for.

I never really took to Captain Underpants, either, who is essentially a supporting character in his own film.

I am, however, very much aware that it wasn’t a film made with an adult audience in mind.

With the summer holidays now in full swing, I’m certainly able to recommend it to any families looking for an appropriate film for the kids.

However, there’s not really enough here to warrant a solo trip to the cinema, with Captain Underpants very much living up to his name.

In short, it’s watchable but nothing spectacular.

Voice Verdict: 6.5/10 (reviewed at Boston’s West End Cinema)
+ George and Harrold
+ Funny one for the kids…
– …but not so much for adults
– Absurd at times