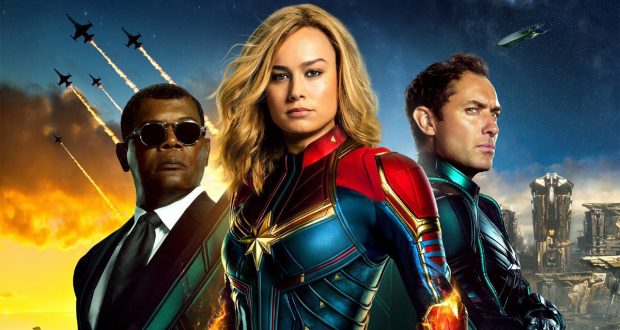 As a big fan of the Marvel Cinematic Universe, it’s always a thrill to see a major new player thrown into the mix.

And the players don’t come much bigger than Captain Marvel, who is (finally) the first female super-hero to get her own MCU film at the 21st time of asking.

Comic enthusiasts will have been looking forward to her arrival for some time; and you’ll be pleased to know that Carol Danvers doesn’t disappoint.

Expertly portrayed by Brie Larson, Captain Marvel is a stellar origin story that also ramps up the hype for Avengers: End Game ahead of her being thrown in alongside Captain America, Iron Man, Thor, Hulk, Black Widow and co next month.

Set in the mid-1990s, the story here manages to be both accessible to people that haven’t seen any MCU films and full of links to the other films for veterans of the shared universe.

A human living among the Kree, we meet Carol/Captain Marvel years into her time with the alien race.

Part of an elite commando unit, she has obvious super powers but no memory of her life beforehand. But, under the leadership of Yon-Rogg (Jude Law), she’s encouraged to forget her past and is a model soldier.

Law is a perfect example of the Kree (who are considered holier-than-thou in the comics) and is clearly scared of Carol’s powers, but he’s unable to control her any more when a mission takes a surprising twist and she crash lands on Earth (in a retro Blockbuster video store, no less).

Led by Ben Mendelsohn’s Talos, Carol is hunted by the Skrulls (the Kree’s sworn enemies) while on her homeworld, but both are looking for the same person (I’ll not reveal who for want of spoiling your experience).

But you’ll surely know that she’s greeted by MCU stalwart Nick Fury (Samuel L Jackson) and Clark Gregg’s Phil Coulson (he was in the first Avengers film and is a regular on TV show Agents Of Shield).

This is a pre-Avengers world, so seeing an alien drop out of the sky is a surprise for this younger version of Fury.

The story mostly takes place on Earth from then on, as Carol bids to find out who she was before the Kree and walks the path to becoming Captain Marvel.

It’s a great thrill ride packed full of 90s music, best portrayed by an amazing action sequence that plays out to the tune of No Doubt’s ‘Just A Girl’.

Larson is a perfect choice for the lead role, oozing charisma and perfectly capturing the DNA of a hero who doesn’t rely on any weapons to save the day.

Her chemistry with Jackson, who looks much younger (don’t worry, it’s great work), is great and the obvious highlight.

The same can be said for all of the effects, most notably when the shape-shifting Skrulls are on-screen.

With villains that have depth, a loaded and likeable cast and plenty of MCU Easter Eggs, this is the perfect appetiser for April’s End Game.