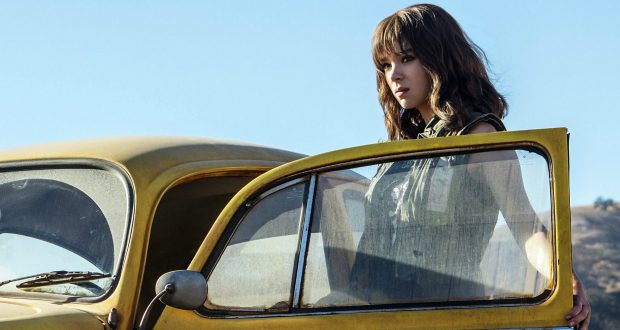 GET IN MY CAR: Hailee Steinfeld's Charlie gets more than she bargained for when she rescues this VW Beetle from the yard.

Although mostly Box Office hits, the Transformers films have been on a steady downward spiral since the largely enjoyable live action original back in 2007.

Often unpopular with the critics for being bloated, CGI action heavy and, well, directed by Michael Bay, it’s fair to say that all five films have had their moments.

I personally enjoyed the first two, but was that down on the series by 2017’s The Last Knight that I’m still yet to check it out.

Anyway, Bumblebee serves as something of a soft reboot for the series, despite being a direct prequel to the 2007 offering.

Directed by Travis Knight, this is the first Transformers movie not to be helmed by Bay – and you can tell.

It strips away the convoluted action in favour of a more personal story.

Want to know why Bumblebee can’t talk, or why he was already in place on Earth in the original? This film has got you covered.

It is at odds with the original at times, but at this stage I’m not sure anybody is really all that bothered by Transformers canon.

Fresh from an exciting battle on Cybertron, we’re shown that Optimus Prime sent Bumblebee (or B-127 as he was called in those days) to Earth back in 1987 in a bid to set up a new base for the retreating Transformers.

The only problem is that the Decepticons know of his presence there and he’s forced to power down and turn into an old VW Beetle after taking one heck of a beating soon after arriving.

It’s then that he meets Charlie (Hailee Steinfeld), who is desperate to own her own car to earn a bit of freedom.

Lost after the death of her father, she forges a meaningful relationship with everyone’s favourite yellow Transformer.

It’s akin to the original in that regard, but Charlie is fleshed out in a much better fashion than Shia LaBeouf’s Sam Witwicky ever was.

However, things start to take a turn for the worse for the pair when Decepticons Shatter (voiced by Angela Bassett) and Dropkick (voiced by Justin Theroux) join forces with the unwitting US military in a bid to track Bumblebee down.

With the Decepticons intent on turning Earth into a wasteland, Charlie and ‘Bee’ – along with her neighbour Memo (Jorge Lendeborg Jr) – are forced to put everything on the line to stop them.

As well as the main players, there’s also a solid turn from WWE legend John Cena here as Agent Burns. He’s a pretty generic military type, but does have a small arc that is relatively pleasing.

Let’s be honest, the Transformers films – much like the Fast and Furious series – are never likely to win any awards for storytelling.

But they fall into the “leave your brain at the door” category and serve up decent action, something that Bumblebee certainly delivers on.

With Steinfield on strong form in the lead role, it’s hard not to buy into her relationship with Bee – and because that works, so does the film.

I can’t tell you that it’s the best Transformers film and I can’t honestly say that it’s a top notch action fare.

But Bumblebee is plenty of fun, which is something that the series badly needed at this point.