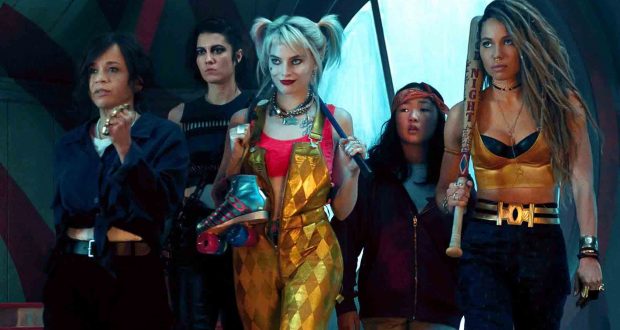 If anything good came from the largely disappointing Suicide Squad film back in 2016, it was that Margot Robbie made for a great Harley Quinn.

The DC Extended Universe (DCEU) have duly taken note of that relatively small win and thrown her front and centre of their latest offering; Birds Of Prey (and the Fantabulous Emancipation of One Harley Quinn, to give it’s full title).

And, with that in mind, director Cathy Yan and writer Christina Hodson dial up the crazy to the absolute max, with the story feeling like something directly out of the mind of the hyper-intelligent but deranged lead.

If you know little of Quinn’s background, she’s a PhD educated psychologist (real name Harleen Quinzel) who was seduced by The Joker while working at the infamous Arkham Asylum.

This version of Quinn follows on from the events of Suicide Squad and is dealing with the break-up of her relationship with ‘Mr J’.

She’s enjoyed the protection that comes with being the other half of the Clown Prince of Crime, but as soon as word gets out that she’s no longer with Joker, she discovers that most of Gotham has a beef with her.

McGregor seems to be having a really fun time as one of the lesser used Gotham villains and that helps elevate this offering way above Suicide Squad.

I’ve not mentioned the other Birds of Prey too much yet, which is kind of in keeping with how the film plays out.

I very much enjoyed the excellent Winstead as Huntress. Although she’s used sparingly, she’s a genuine scene stealer.

Black Canary gets more screen time and Smollett-Bell does a great job too, while Perez’s Renee Montoya also has a solid story and feels more of a grounded character.

They are brought together by the actions of Ella Jay Basco’s Cassandra Cain, a pickpocket who unwittingly nabs an item that sends the main characters on a major collision course.

With innovative fight scenes, an enjoyable sound-track and another stand-out showings from Robbie, there’s much to enjoy here.

Sure, the storyline is a car crash by design and much of the humour will be a little bit Marmite for cinema-goers, but Birds of Prey is a blast.

Much like Aquaman before it, strap in and enjoy a flawed but crazy ride.