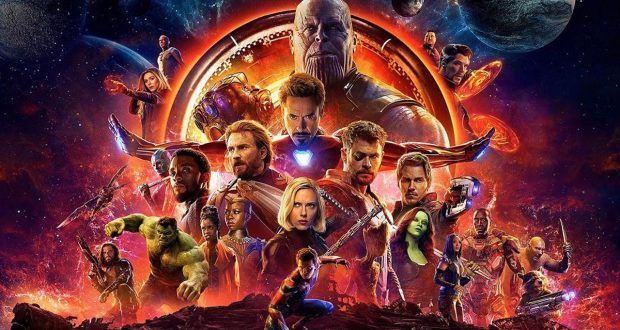 HUGE CAST: A selection of the heroes utilised in Infinity War as the Avengers and co bid to take down Thanos (back, centre).

After serving up 18 films in ten years, it always felt like all roads in Marvel’s Cinematic Universe (MCU) were leading towards Infinity War.

The third Avengers film has perhaps the biggest cast ever assembled – and also showcases the MCU’s big bad Thanos, who has been teased numerous times in the past.

If you’re not aware of the MCU, it’s essentially Marvel’s shared universe that houses familiar superheroes such as Iron Man, Spider-Man, Captain America, Thor, Hulk, Black Panther, Doctor Strange and the Guardians of the Galaxy (who have all had their own films over the past decade).

It’s fair to say that almost every film has been a big success, but they often suffer from the same nagging problems; the villains are usually one-dimensional and the heroes always feel safe from serious harm.

Well, I’m here to tell you that infinity War is an absolute game-changer on both of those fronts.

Thanos (voiced by the excellent Josh Brolin) is the best villain the MCU has ever deployed…and it’s fair to say that his bid to cull half of the life in the galaxy has some big-name casualties.

It’s hard to compress Infinity War’s near three-hour story into a spoiler-free review, as there are so many plates spinning at the same time. Anyhow, the basic plot surrounds Thanos’ bid to get his hands on all of the Infinity Stones – six immensely powerful objects tied to different aspects of the universe.

We’ve seen a few of these over the past decade – most notably the Tesseract Loki used in the original Avengers, Dr Strange’s Time Stone and the Aether used in Thor: The Dark World. With all six,

Thanos would be all powerful and be able to do what he wishes with the universe.

His quest, which is aided by his four henchmen – known as The Children of Thanos – puts him on collision course with our heroes on multiple fronts (be it in space, or back on earth) as they bid to stop him.

The random nature of the team-ups is a real strength of Infinity War and helps make these well-known characters delivery some memorable moments.

Indeed, there are too many characters to list, but each one gets enough screen time to stamp their mark on the film.

It’s fair to say that this is very much the Thanos show, though. He delivers a gut punch to fans of the MCU straight out of the gate – and makes some of the heroes seem powerless as his strength grows.

The CGI brute is one of the most memorable villains in the genre and, with Infinity War ending on a real cliff-hanger, it’s going to be interesting to see where the story goes next.

As somebody who has enjoyed all that the MCU has had to offer in recent years, I have no hesitation in telling you that it’s the best offering to date.

While delivering trademark humour and epic action, Infinity War is also emotional and will genuinely shock you.

If you’re a fan of the films or not, this is the best action film of the year so far and an obvious must-see.

PARENT AND BABY SHOWING
Wed 10am – Guernsey Literary (12A)