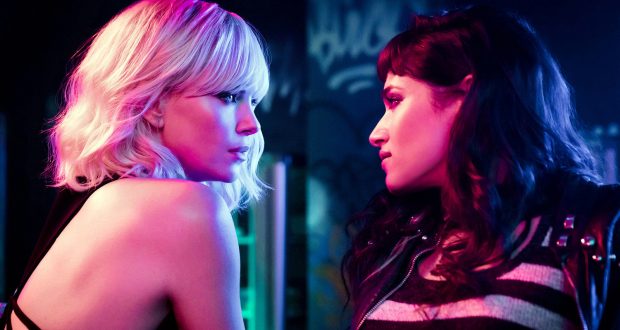 I love it when I’m genuinely surprised by how good a film is.

Atomic Blonde, while being on my radar for its impressive cast, wasn’t really overly hyped ahead of its release.

But I can’t help feel that it really should have been, given that the David Leitch-directed action spy thriller is up there with the most fun I’ve had at the cinema in a while.

Set in 1989 Berlin – at the exact time the wall is pulled down, no less – Atomic Blonde makes no bones about what kind of film it’s going to be from the get-go.

It’s “not that story”, in its own words, but a tale of espionage in the shady world of East Berlin.

All of the major nations found themselves muddled up in the political minefield that was Berlin, but this is more of a fun spy-game set in that very volatile environment.

MI6 agent Lorraine Broughton (Charlize Theron) is our vessel into that world – and what an amazing character she is.

Lorraine is sent in by bosses Eric Gray (Toby Jones) and Chief ‘C’ (James Faulkner) to investigate the murder of one of their agents at the hands of a KGB hitman.

At least, that’s what everyone is supposed to think.

Her main mission is to recover a list of every secret agent working on both the Russian and British intelligence teams before the rival agencies can get their hands on it.

She’s also tasked with making contact with MI6’s other asset in Berlin – James McAvoy’s rather eccentric David Percival, who has his own ideas on how things should be done.

But negotiate it she does – and how.

Those of you that have seen the amazing John Wick films (Leitch co-directed the original) will know that there is a high bodycount and some visceral fight scenes, which really deliver in a big way.

All played-out to a great 1980s soundtrack, Theron’s Lorraine might actually dish out more damage than the above-mentioned Wick.

The film includes one of the best fight scenes I’ve seen in a long time (I’ll not spoil, but she attempts to take on a unit of KGB men by herself).

As well as the awesome action, the spy element of the film ensures that there are double-crosses galore and killer twists that you’ll really not see coming.

Theron, unsurprisingly, is the star of the show here.

Her character could easily be compared to a James Bond type, but to do so would detract from a great female spy in her own right.

Her chemistry with Boutella is electric too, making for a really intriguing relationship between the two femme-fatales.

McAvoy, Goodman and Jones are, of course, all great too – making for a great cast.

For me, this is one of the must-see films of the year so far and stacks up against everything else in the genre.