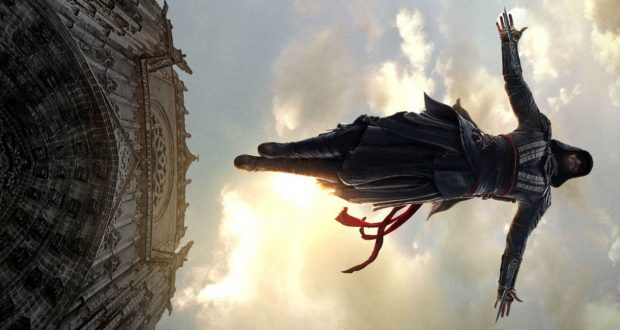 LEAP OF FAITH: Michael Fassbender as assassin Aguilar in Assassin’s Creed, one of two roles he plays in the film.

I’ll be honest with you from the off – I’m both a massive fan of video gaming and the Assassin’s Creed series.

I’ve played every mainstream version of the game, which is now easily one of the biggest Triple A franchises on the gaming scene.

It’s always stood out as a unique concept that would convert to the big screen, but so many video game adaptations have flopped when making the same move.

However, when I saw Michael Fassbender (Steve Jobs), Marion Cotillard (Inception) and Jeremy Irons (Batman v Superman) – not to mention Brendan Gleeson, Charlotte Rampling and Michael Kenneth Williams – attached to the project, I realised director Justin Kurzel (Macbeth) was going all in.

For those of you not familiar with the Assassin’s Creed games, they are quite complex. Essentially, the focus is on an age-long war between two factions – the evil Templars and anti-hero Assassins.

Think of a major conflict in human history and creators Ubisoft have cleverly added that war to them. I’ve battled alongside Napoleon in the French Revolution and helped out George Washington in the American Civil War in just two of the series’ many games.

To do so, the series introduced a machine called the Animus, which allows direct ancestors of Assassins or Templars to synchronize with and relive the memories of their long-dead relatives.

In the movie, Fassbender’s Callum Lynch is a genetic match for his ancestor Aguilar, who was an Assassin during the Spanish Inquisition.

He’s essentially taken by Templar organisation Abstergo and forced to enter the Animus in a bid to discover the location of The Apple of Eden, an artifact believed to hold the key to “curing violence” in the world.

Cotillard’s Sofia is his handler and wants to find the Apple to do good in the world. Sadly, her father Rikkin (Irons) has other ideas, with the Templars seeking the ancient object in order to wipe out the Assassins once and for all.

The story could have been explained better for newcomers to the series, but to me it is classic Creed and a concept I very much enjoy.

Like the games, the modern day segment of the film is slower and full of deception and conspiracy.

That bit doesn’t deliver quite as well as the time we spend with Aguilar (who Fassbender also plays) and his friends, which is full of breathless action and incredible chase scenes.

Here, Ariane Labed plays Assassin Maria and Javier Gutierrez a formidable Templar villain called Tomas de Torquemada. All of these scenes are in Spanish – a move I really liked.

Let me get my positive views in first; Assassin’s Creed is comfortably the best film I’ve ever seen that is based on a video game.

It stays true to the series and offers the same break-neck action I come to expect.

It’s a credible film that may not appeal to everyone, but fans of the game will love it.

As you’d expect, Fassbender and Cotillard excel in the lead rolls – especially during the awesome Animus scenes – while Irons and Rampling both hit the right notes as high-ranking Templars.

For those who are jumping into the series for the first time, you may find yourself confused – and at times baffled – by what is going on.

The concept of the Animus and Apple really aren’t explained all that well, with the notion of looking for a cure for violence coming across as pretty cringe-worthy too.

If you can accept its shortcomings, Assassin’s Creed is a strong action offering that has certainly laid the groundwork for a possible sequel – and also does the video game series proud.