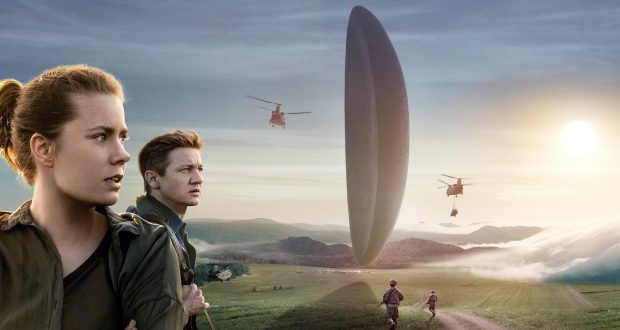 WHY ARE THEY HERE?: Amy Adams and Jeremy Renner (left of picture) are both on fine form in Arrival.

It occurred to me while watching Arrival that most films involving supposed “aliens” depict them as hostile – and by default I was expecting just a more serious version of Independence Day.

To be honest, I couldn’t have been any further off. Don’t get me wrong, I love this genres go-to plot, but Arrival certainly brings something very different to the table.

Driven by a powerhouse performance from Amy Adams (Man of Steel), it tells a story of 12 extra-terrestrial ships (well, they look like giant rocks) landing at various locations across the globe.

Why are they there? What do they want? Are they hostile? They are the questions the world leaders want to know – and when the aliens appear to make contact with the humans, America calls for linguistics expert Louise Banks (Adams) to attempt to decipher their message.

The ships open up every 18 hours, so Banks and Connolly – who have very different views on the world – are able to run the rule over the aliens in a bid to find out their purpose on Earth.

Saying any more on the plot would ruin a few of the excellent surprises and the impressive twist that follows, but the tension built up by director Denis Villeneuve before and during the first contact scene is mighty impressive.

What I will add is that the task of getting to the bottom of just why these ships have chosen to land on earth is made difficult by the many different nations not sharing their respective information – something you could imagine happening in real life.

Despite the global scale of what is going on in Arrival, it does feel like a very intimate and closed off story.

The tone here is so far removed from the likes of Independence Day and District 9 (two films I love) – and in truth, I found that refreshing. I’m the first to sign up for inter-galactic battles, but this feels like sci-fi for a more patient audience.

Although the story can feel slow at times, it’s a very intriguing one that is worthy of your time.

Adams does much of the heavy lifting, with her past, present and future all explored in great detail.

One of the top actresses in the world at the moment, her stock will certainly be further lifted by such an impressive performance here. Renner proves a strong foil for her too, with the pair serving as an impressive combination.

Whitaker is his usual scene-stealing self too, while there is also a cameo from legendary 24 villain Tzi Ma.

Arrival won’t be for everybody. You need to be patient and allow the story to be told, while not expecting the usual fireworks this genre is known to deliver.

But, with a chilling score, great visuals, strong performances and a thought-provoking story, it’s a film you shouldn’t ignore.