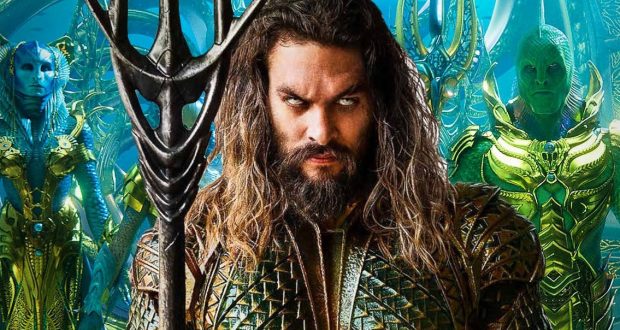 WET AND WILD: Jason Momoa is perfectly cast as Aquaman.

If you could pinpoint any reason why Marvel have upstaged DC over the past decade, it would be that they’ve found the perfect mix between action and humour.

Sure, there’s a place for darkness and grit in the crowded comic book world (see Captain America: Winter Soldier), but finding that sweet spot has proved elusive for the DC Extended Universe (DCEU).

In Aquaman, a film that really should have come out before Justice League, DC have embraced the craziest elements of their universe and delivered their most enjoyable offering to date.

Directed by James Wan, this insanely entertaining action fare not only gives Arthur Curry/Aquaman (Jason Momoa) a much-needed back story, but also gives us the gift of Atlantis – an underwater city that showcases some of the best world building in the comic book genre to date.

It’s an origin story of sorts, the kind which would have made his appearance in Justice League all the more pleasing had DC not felt the need to rush that one out beforehand.

The open exchanges do their best to humanise Arthur. The son of everyman Tom (Temuera Morrison) and Atlantean royalty Atlanna (Nicole Kidman), we discover that he grew up without his mother and was something of a fish out of water during his school years.

Despite being trained by Willem Dafoe’s Vulko, Arthur feels no ties to Atlantis and plays vigilante on land.

But, when Arthur is approached by princess Mera (Amber Heard) about Atlantis’ plans to wage war against the mainland, he’s forced to challenge his half-brother Orm (Patrick Wilson) in a bid to unify the two worlds.

This forces Arthur to set off on a journey to try and find an ancient Atlantean artifact that will help him turn the tide against Orm and his conflicted ally King Nereus.

Running alongside the main plot is the battle between Aquaman and Black Manta (Yahya Abdul-Mateen II), who has a personal beef with Arthur.

This plot often feels like a distraction, but does serve up a memorable battle in the scenic Sicily in one of the film’s stand-out moments.

Thankfully, it’s one of many brilliant battles that are crammed into the 2.22hrs running time.

The finale, an epic underwater war, is one of the best action sequences DC has served up yet.

Sure, Aquaman is full of plot holes (I couldn’t understand why some Atlanteans could breathe on land and others couldn’t) and it is spinning so many plates at the same time.

But, somehow, it works to serve up the best DC film since Wonder Woman.

Momoa is perfectly cast in the main role, while his chemistry with Heard is also a strong point.

It was also great to see Kidman back on the big screen, while Dafoe seems to enjoy a rare role as one of the good guys.

Wilson’s Orm is perhaps the weakest of the loaded cast and the story could have existed without Mateen at this stage.

Film of the year? No. But it’s a whole lot of fun.