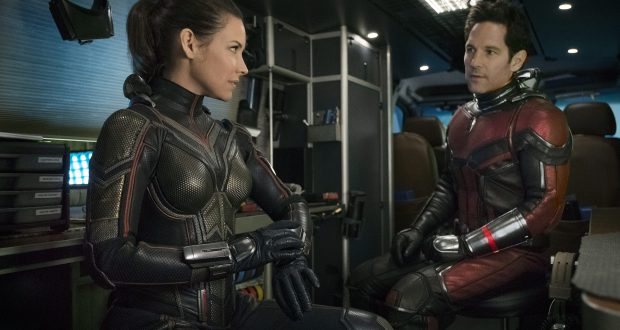 One of Infinity War’s lingering questions (other than the wider reaching ramifications of Thanos’ actions) concerned the whereabouts of Ant-Man/Scott Lang.

Locked up in a cell after his part in Captain America: Civil War, Scott was only briefly referenced in Marvel’s game-changing Avengers offering a few months ago.

Well, if you’re hoping that Ant-Man and The Wasp will answer all of the Marvel Cinematic Universe’s (MCU) big questions, I’m afraid that you’re in line for a disappointment.

That being said, it certainly fills in the blanks for this set of characters – Ant-Man (Paul Rudd), Hope van Dyne/The Wasp (Evangeline Lilly) and Hank Pym (Michael Douglas) – and tells a very personal and contained story that is easily as much fun as the fine 2015 original.

It plays out in the period between Civil War and Infinity War, as we discover that Scott took a deal to get him out of the slammer – only to find himself under house arrest for a two-year period.

He finds ways to keep himself entertained, enjoying quality time with his daughter Cassie (Abby Ryder Fortson) and has formed a business with former cell-mates Luis (Michael Pena), Dave (T.I.), and Kurt (David Dastmalchian) in a bid to get back on the straight and narrow.

However, his new life is thrown into jeopardy when Hank and Hope – who are intent on launching a risky rescue mission to find presumed-dead wife/mother Janet (Michelle Pfeiffer) in the Quantum Realm – come back into his life right before his sentence is due to end.

With the pair on the run because of Scott’s actions in Civil War, it’s fair to say that their relationship is a little strained this time around.

But he must decide if he wants to take on the mantle of the size-shrinking Ant-Man again in a bid to help his friends, or keep on the straight and narrow and have the life he craves with his daughter.

Now, it’s fair to say that Marvel films are often judged by the quality of their villain. This time around the headline act is Hannah John-Kamen’s Ghost. She’s a menacing presence, but has very a very personal agenda that is somewhat refreshing.

Her needs are linked to Janet’s situation, putting her on a collision course with our team of heroes.

I’d not say that she’s overly memorable, but she’s certainly relatable and has a decent arc.

In what is something of a loaded cast, the charismatic Walton Goggins also stars as black market dealer Sonny Burch, but kind of feels like a convenient side villain.

That being said, he and his goons do star in some of the better scenes, allowing Ant-Man and (in particular) The Wasp to show off their skills.

Throw in a cameo from legend Laurence Fishburne and returning director Peyton Reed has plenty of plates spinning throughout.

As with the original, the action is creative, innovative, enjoyable – and best seen in 3D. The core characters – Rudd, Lilly and Douglas – are perfect for their roles once again, making it a very enjoyable watch.

As I’ve said a few times, the stakes here are mostly personal for the characters.
But be sure to hang around for the post-credit scenes, which are actually the true – and very hard-hitting – ending of the story.

They very much tie into the next Avengers film and offer up clues as to where the wider MCU plot may go next.

Funny, action-packed and full of personality, Ant-Man and The Wasp takes everything that was good about the original and improves on it.

It’s another Marvel hit that, although more light-hearted, is necessary viewing.