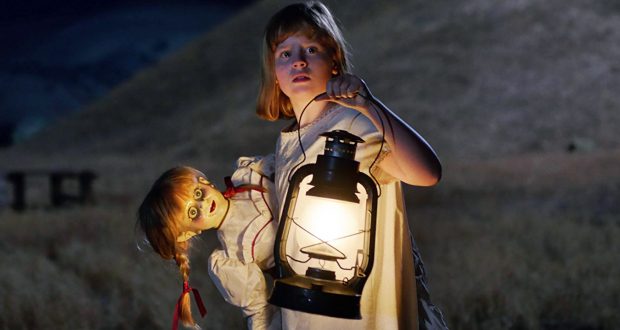 Even if you’re a fan of horror movies, it’s likely that the eery trailer for Annabelle: Creation sent a shiver or two down your spine.

Serving as both a follow-up and prequel to 2014’s Annabelle, the David F Sandberg-directed Creation also tells the story of how the creepy doll introduced in both the original and The Conjuring (2013) came to be.

While never quite reaching the dizzy heights of James Wan’s critically-acclaimed The Conjuring, Annabelle: Creation does significantly improve on the 2014 original and – despite using plenty of clichéd horror movie tricks – succeeds in being an enjoyable experience.

The couple decide to offer Sister Charlotte (Stephanie Sigman) and her group of homeless orphaned girls refuge in their large (and actually not that creepy) country home that looks like something out of an old-school Western.

However, things soon take a turn from the worse the moment Samuel warns them never to enter one room, which remains locked at all times. Naturally Janice, who struggles to get around on a crutch due to her condition, can’t resist having a peek inside – and succeeds in unleashing the evil forces that possess Bee’s doll, named (of course) Annabelle.

While the other girls Carol (Grace Fulton), Nancy (Philippa Coulthard), Kate (Tayler Buck), Tierney (Lou Lou Safran) and even Linda aren’t as concerned as Janice, the force grows and the house (all of a sudden) becomes incredibly creepy.

It then becomes a matter of who can survive Annabelle’s wrath, with some of the sequences feeling suitably dramatic and claustrophobic.

With Otto, LaPaglia and Sigman not getting huge amounts of screen time here, Creation succeeds because of the performances of the youngsters.

While the elder four girls do a solid job, it’s Bateman’s Janice and Wilson’s Linda that get you hooked.

You’ll believe in their friendship and want them to not only survive, but succeed in finding a family to love them.

Obviously, any good horror needs to bring the terror too, but that would have fallen by the wayside if the characters aren’t up to scratch.

Don’t get me wrong, Creation isn’t a classic. While the doll is uber creepy, the demonic presence could have been done better – and there is some questionable CGI incorporated.

But, with the story pretty solid, it means that Creation isn’t just a mish-mash of cliched horror moments, which helps it stand out from the crowd.

Accessible to those that haven’t seen the original and The Conjuring films, it’s certainly worth your time.