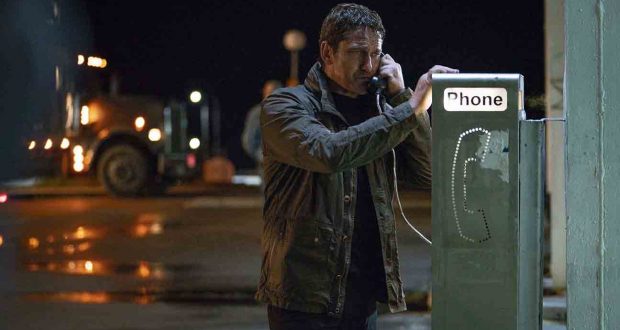 ON THE RUN: The tables have turned on Mike Banning (Gerard Butler) in Angel Has Fallen.

If you’re a fan of B-list action films, you’re probably aware of the trials and tribulations of secret service agent Mike Banning.

Having survived the White House attack in Olympus Has Fallen and something similar in London Has Fallen, Gerard Butler’s grizzled Banning is back doing what he does best in Angel Has Fallen – being a one-man army.

This time, however, the tables have turned and Banning himself becomes the biggest threat to the President (Morgan Freeman).

It follows the tried and tested pattern of the first two films, with multiple action sequences that often catch the eye and plenty of visceral action that does its best (and ultimately fails) to live up to the high standards set by the excellent John Wick films.

Let’s be honest, these films aren’t great – but they have their place in the genre if you’re willing to accept their obvious shortcomings when it comes to storytelling.

This time around Butler’s Banning is a bit of a mess. Clearly over-medicating himself after years on the frontline, he’s suffering after multiple concussions and is unable to sleep.

It’s affecting his personal life, with wife Leah (Piper Perabo) and his baby daughter unaware of his struggles.

It’s that relationship that sees our hero torn between taking a new role to replace Secret Service Director David Gentry (Lance Reddick) or staying active, with the pair fondly recalling their time as “lions” at the tip of the spear.

However, when President Trumble’s fishing trip goes horribly wrong on Banning’s watch, his world is turned upside down.

Suspected of masterminding the attack, he must find out who is framing him before it’s too late – with the lives of the President and his family on the line.

It’s unclear why all Banning’s friends would believe he’s capable of such an attack, but he’s hunted by FBI Special Agent Helen Thompson (a badly underused Jada Pinkett Smith) for the vast majority of the film.

It’s from this point that Angel Has Fallen easily surpasses the largely rubbish London Has Fallen, with the set-pieces and interaction much more believable and enjoyable.

There’s even a great turn from Banning’s estranged father Clay (Nick Nolte) in the second half of proceedings that helps build up the story a little more than we’re used to.

Don’t get me wrong, there’s nothing massively original or unique about Angel Has Fallen.

Its story is largely generic and hard to believe at times, but it’s another solid popcorn offering from the series.

If plenty of explosions, multiple gunfights and endless macho behaviour is your thing, then Butler and co have got you covered.