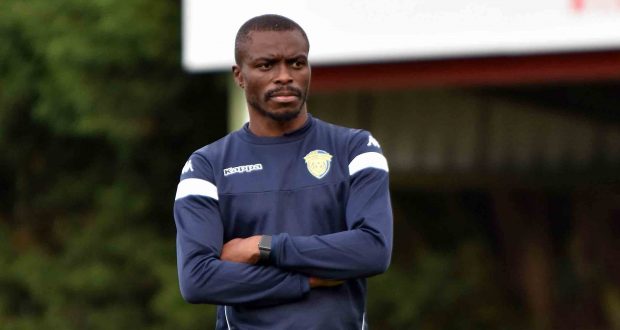 Familiar foes Moreman and Waumsley do a number on Spalding United

Two former Spalding United strikers turned on the style to hand the Tulips their first Pitching In NPL Midland Division defeat of the season at Yaxley on Tuesday night.

A first-half double from Josh Moreman (22 and 32) wiped out Jordan Macleod’s 15th-minute opener to give the Cuckoos a 2-1 half-time lead at the In2itive Park Stadium.

That’s how it stayed up until 20 minutes from time, when Tom Waumsley sealed the points for Yaxley.

It’s a first defeat as Spalding manager for Gaby Zakuani, who was without star man Marcus Maddison through injury.

Spalding now turn their attention to an Emirates FA Cup clash at Brantham Athletic on Saturday (3pm), before a home league date against Soham Town Rangers on Tuesday (7.45pm).

Moreman had the first chance of the game, flashing an attempt wide before Spalding broke the deadlock.

That man Macleod, who netted twice against Peterborough United last week, lobbed home for Zakuani’s side after an assist from Glenn Yaya.

However, the hosts piled on the pressure and, after Dan Cotton went close, Moreman lashed home a leveller.

Stand-in Spalding keeper James Goff was then forced to deny Kyle Nolan, before Moreman netted his second with a fantastic first-time volley.

The Tulips thought they’d levelled just before the interval, only for Gregg Smith’s header from Joel Brownhill’s delivery to be ruled out for offside.

Goff was forced into a double save early in the second period, while Macleod was denied by a top stop from Josh Carpenter.

But it was Yaxley who had the final word, with Waumsley settling the contest in the 71st minute of an exciting derby duel.

Meanwhile, former captain Lewis Brownhill has decided to walk away from the Sir Halley Stewart Playing Field.
The midfielder, who joined the club under former boss Matt Easton, said he was going to take some time to assess his options.