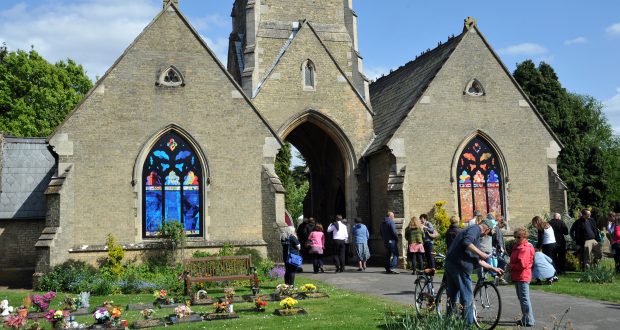 A new wedding venue and pop-in cafe are among the options being looked at for Holbeach’s historic Cemetery Chapels after a planning application was submitted to improve access for the public.

The 1854 brick built buildings connected by a stone archway and tower are owned by Holbeach Parish Council.

For a decade they’ve looked to bring the chapels back into use after they ceased to be used for religious purposes in 2008, setting up the Holbeach Cemetery Chapels Trust to do just that.

The Trust has now applied for permission to change the use of the chapels from religious to educational and community.

It also asks for permission to create disabled parking and a turning space outside where there are no marked graves along with ground maintenance.

The proposals include the currently open central archway being covered with what the application calls ‘glazed screens’ chosen to ‘maximise light and views’.

That necessitates the footpath through the archway having to be re-routed around the chapels, though the Trust also says the glass will have doors at both ends.

It’s hoped a successful planning application will lead to further Heritage Lottery funding while the Trust says it will also apply for listed building status for the chapels.

The Design and Access statement submitted with the change of use application, states: “With no use the owners, Holbeach Parish Council, cannot fund more than emergency maintenance repairs.

“As a result, the condition of the building is poor and deteriorating. Without a use being found for the building the eventual result will be demolition as has happened to several 19th century cemetery chapels.

“The enclosing of the carriage porch is necessary to ensure that both chapel spaces can work together as a single occupancy.”

The group’s secretary Jenny Worth said: “We’ve submitted the planning application as part of our bid to get funding with the Heritage Lottery in March next year.

“We want to refurbish the chapels and make them more accessible for the public.

“We’re hoping to make it into a wedding venue, hopefully able to host civil weddings and there’s an idea to have a pop-in cafe with exhibitions from local artists.

“We also want more groups to use it eventually which a few already do.

“We’ve collected a lot of data about the people buried in the cemetery so it would be interesting to do something about that too.

“I think it will be really exciting.

“It’s going to be quite hard work to get the money but we’ve been encouraged that the Heritage Lottery have encouraged us to bid for the money.”