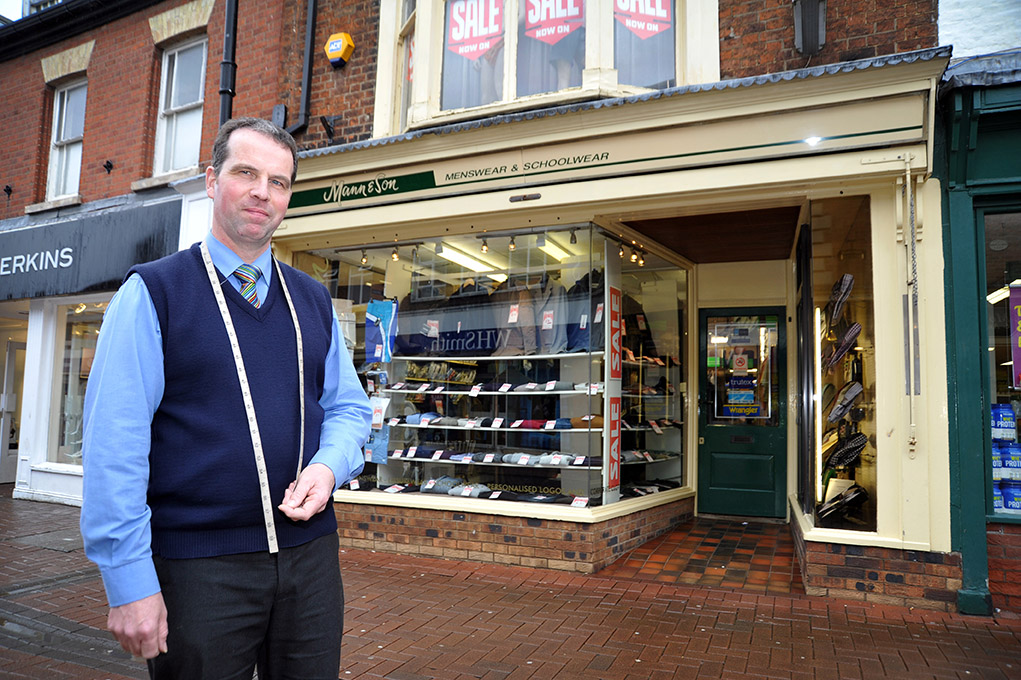 Stuart Parkin, who has worked at Mann and Son since leaving school – and is the perfect advertisiment for the shop, having always bought his clothes from there. Photo: VNG190215-20

For many of us, Monday will signal the start of just another working week.

For Stuart Parkin it will be poignant – the first day of the rest of his life after 38 years as one of Spalding’s best-known faces in retail.
He is leaving Mann and Son in Hall Place on Saturday under redundancy ahead of its impending closure.

Stuart (53) said: “It will be a tough time for me emotionally. I shall leave with a heavy heart.
“I’m going to take a couple of months off and then look to get back into work – I want to remain in retail.”

Aged 16 in 1977, Stuart joined as a £21.70-a-week shop assistant straight from Gleed School, on the recommendation of careers master Utterby ‘Tut’ Snaith.

He joined a staff of Doug and Eileen Mann, their son and present-day owner Nigel, and part-time worker Marion Toynton.
“We had five members of staff in the shop then, whereas if you get five customers in now it seems full!” said Stuart.

Mann and Son was then – as it still is now – a traditional shop priding itself on a high level of personal service and knowledge.
In fact, Stuart – who’s a big fan of TV’s Open All Hours – is a loyal and dedicated right-hand man not unlike the show’s character Granville.

He’s always cycled to work, whatever the weather.
That exercise has probably contributed to a sickness record, which has seen him absent just a handful of times. The longest period was two-and-a-half weeks following an eye operation in 1981.

Stuart has served through many changes, including the end of half-day closing on Thursdays, the advent of pre-washed jeans and the competition provided by internet shopping.
Customers’ needs have altered too. Long gone are the requests for a “Sunday shirt” and where once the largest clothes sizes stocked were 44in waist and 18in collar, today it’s 60in and 23in.

Schoolwear – accounting for about a third of the shop’s business – has been his favourite part of the job.
“It’s hard at back to school time but it’s rewarding,” said Stuart. “Anybody I fitted up in 1977 will now be 49!”
He added: “I’ve got a good memory and if you can remember customers’ names, it goes a long way.”

So where does a menswear worker turn to for his own clothes?
“I’d be a fool to go anywhere else! I’ve never even set foot in a Primark.”

Nigel (61) is retiring and winding down the shop, which his grandfather John (Jack) opened 104 years ago on Saturday.