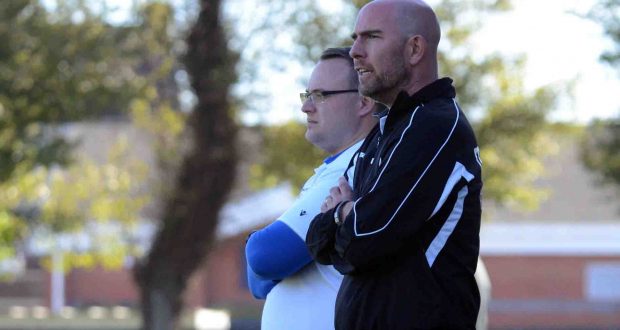 Matt Easton is hoping that Saturday’s derby with Stamford will inspire Spalding to kick-start their BetVictor NPL South East season.

The Tulips haven’t managed a win in any competition since they saw off Stocksbridge Park Steels 3-1 back on September 7 – a run which now spans seven games.

That leaves Spalding down in tenth place, which is four points fewer than their South Lincolnshire rivals Stamford, who are sixth despite playing three games less.

Boss Easton admits that having last Saturday’s game at Frickley Athletic postponed was a “blessing in disguise” and hopes that both his players and the Tulips’ fans will be up for the Sir Halley Stewart Playing Field derby.

And, with skipper Lewis Brownhill available to return for the derby after over a month out, the Tulips chief is hopeful of upsetting the Daniels.

“I think everybody at the club was pleased to see the Frickley game off,” admitted Easton. “We really needed another week to get the players fit again after our selection problems.

“That being said, I think we’re all looking forward to the Stamford game. It is our main derby and I think both teams look forward to this game.

“I’d hope that the fans will really be up for this game, too. We really need them to turn up and be full of energy for what is a really tough match for us.

“Stamford are a very strong team, but we certainly feel we’re capable of getting something from the game. We’ve been on a tough run and this is a hard fixture, but we need to crack on again.

“We’ll have a few players back, but the key one is obviously Lewis Brownhill. He’s a really good footballer, but an even better leader.

“The example he sets for the rest in the middle of the field is a very important part of what we’re trying to do here.

“I’m also hopeful that George Zuerner will have shaken off his hamstring problem and Kegan Everington isn’t suspended as we initially though, which is a big boost.”

Spalding should have a new face in the matchday squad, with former Grantham Town winger Kevin Baston agreeing a deal to join.

Easton describes him as a “good player with pace to burn” and has signed him to a permanent deal.

He’s also extended the loan of young Peterborough United striker Nathan Rudman, while key defender Neal Spafford is having a scan on his injured knee next Friday.

Spalding are hoping the results aren’t as bad as those received by youngster Archie Moyses, who is about to undergo surgery on his damaged anterior cruciate ligament in his knee.

He’s expected to be out for an entire year, providing his surgery goes as planned.