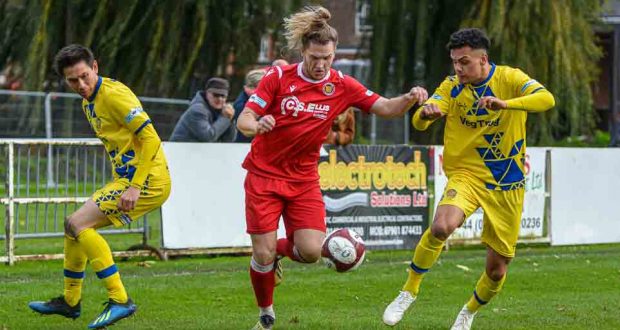 Spalding United boss Matt Easton wants his side to keep up their recent upturn in form this weekend – and has vowed to entertain the Sir Halley Stewart Playing Field crowd.

The Tulips ended their eight-game wineless run with a 2-1 BetVictor NPL South East Division victory at Newcastle Town last Saturday (page 53), which was hot on the heels of a fine 2-2 draw with Stamford.

This Saturday sees sixth-placed Sheffield FC visit the Sir Halley (3pm), with Easton confident that his charges can extend their unbeaten run to three games.

Spalding go into the game in ninth place and are just three points shy of their opponents, who are famously the world’s oldest football club.

“It was nice to get that monkey off our back last weekend,” admitted the Tulips chief. “To be honest, I was always confident – we went there with a strong squad.

“We actually had few problems in getting the win, barring a mad few minutes after we conceded.

“Sheffield is a different kind of test; they are going very well this season.

“But I’m certainly not scared of them, we are looking very dangerous going forward now. Jenk Acar is back to something like his best, Jamie Jackson is looking fitter every game and Joel Brownhill has been playing very well.

“We need to go into the game with the right attitude. We certainly have the squad to trouble anyone, especially at home.

“The fans have really been with us in recent weeks and we have an obligation to go out there and do our best to entertain them.

“That’s what we’ll be looking to do on Saturday…but it’ll probably be a 0-0 draw now that I’ve said that!”

Despite Easton’s positivity, he has been dealt a blow ahead of the Sheffield showdown with skipper Lewis Brownhill unavailable.

The midfielder, who has scored in back-to-back games since returning from a lengthy absence, underwent a minor operation this week and won’t be fit enough to feature.

With fellow midfield man George Zuerner also missing, Easton admits that his side will need to find a way to recreate the energy given to them by their captain.

He added: “Lewis is a very big player for us. He presses very high and it’s no coincidence that we win the ball back much higher up the field when he’s player.

“Lewis, Kegan Everington and George all complement each other nicely in midfield – so things are obviously harder when any of them are missing.

“We have to find a way to recreate that on Saturday. Sheffield aren’t unbeatable and I still think we have enough to trouble them.

“But it’s fair to say that we need to adapt to not having Lewis available, he’s key to what we are trying to do here.”

Minus Lewis Brownhill, Easton has the same squad that won at Newcastle at his disposal this Saturday.

Josh Spencer and Zuerner are a week away from a return, while keeper Michael Duggan is closer to two weeks away from full fitness following his back injury.

Defender Neal Spafford is waiting for news on his knee scan, while Archie Moyses will go under the knife in December as he has surgery on his injured cruciate ligament in his knee.

Sheffield, meanwhile, have won three of their last four games but haven’t played since winning 1-0 at Sutton Coldfield on November 2.