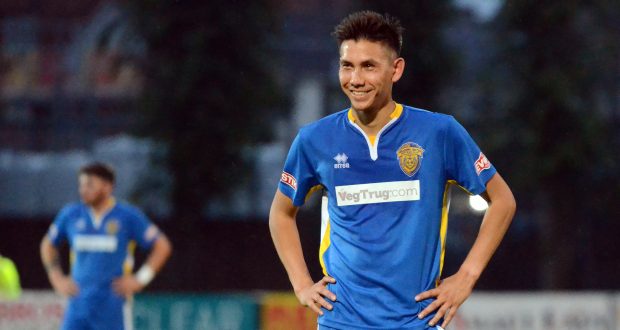 The Tulips went down 3-0 to Lincoln United in a one-sided derby and now face a tricky trip to sixth-placed Pontefract Collieries this Saturday (3pm).

Easton, who admits his side got what they deserved last weekend, insists that he isn’t too concerned by Spalding’s results against the top teams this season.

“Saturday was probably the right result,” conceded Easton. “We didn’t defend well enough and didn’t perform as well as we have been lately.

“That was disappointing, but I’ll certainly not be getting too downbeat by a loss against a team second in the table.

“We didn’t get carried away when we were winning, so we won’t when we’re losing.

“We’re just not consistent at the moment, but that’s something we’re working on.”

This weekend’s hosts Pontefract have won four of their eight home games so far this season, losing just twice.

The Spalding boss wants to see his side look a bit better in possession at the G & R Construction Stadium, but admits it’ll be tough to bring points home.

Easton added: “November has been a tough month fixture-wise. We don’t judge ourselves in games against the better sides, but it’ll be a good challenge for us.

“We need to settle down and be a bit more comfortable with the ball and each other.”

Easton was buoyed by the return of midfielder George Zuerner as a second-half substitute on Saturday – but he’s now without him for as long as eight weeks following a scary incident at home.

The ex-Holbeach United ace feinted at home and fractured his skull, causing a bleed on the brain.

Zuerner has now been released from hospital and the Tulips chief said all at the club wish him a speedy recovery.

Jack Fixter, who went off with an illness last weekend, should be fit to feature but Kegan Everington is suspended.

Easton also hopes to conclude a loan deal ahead of the trip.