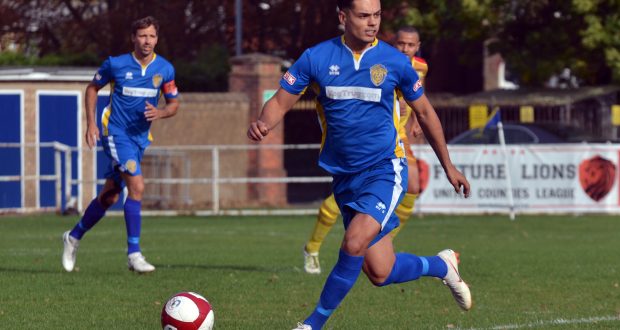 Spalding United boss Matt Easton insists that this weekend’s results in Evo-Stik NPL East Division are of no interest to him.

The Tulips face the rare prospect of a free weekend, which means that their relegation rivals have the chance to catch up on their games in hand.

Spalding, 16th in the table but only three points off the bottom, have played at least two games more than every team below them.

Having suffered a heart-breaking 1-0 home defeat against Frickley Athletic last Saturday (see page 37), Easton could be forgiven for looking over his shoulder at the solitary relegation slot.

However, he feels his side has more than enough quality to secure the points they need to survive, with the boss admitting that four more wins should be enough.

He said: “I’m not really fussed about what happens at the weekend.

“All I’m doing is concentrating on ourselves and what we do, there’s no point worrying about the other teams.

“Our destiny is very much in our own hands and I think that four more wins will be enough to take away any doubt.

“We’ve added five or six new faces to the squad over the past few weeks and it’ll take time for us to gel as a team now.

“To be honest, having three training sessions and no game over the next week or so will do us the world of good.”

Easton does admit that Saturday’s home loss against Frickley was a “rough afternoon” for his side, with the harsh weather conditions making it a game to forget.

He feels that a draw would have been the right result, but insists the visitors were just more clinical infront of goal.

“I thought we looked nice and solid,” added the Tulips boss. “But it was a rough old afternoon.

“They were the better side in the first half and we had the better of the second, so I felt a draw was about right.

“It was a game of few chances, but they took theirs late on. I felt we deserved a draw, but that’s is football.”

Meanwhile, key winger Jenk Acar should be fit to return in Spalding’s next fixture at Carlton Town on Saturday week after a scan on his knee came back largely positive.