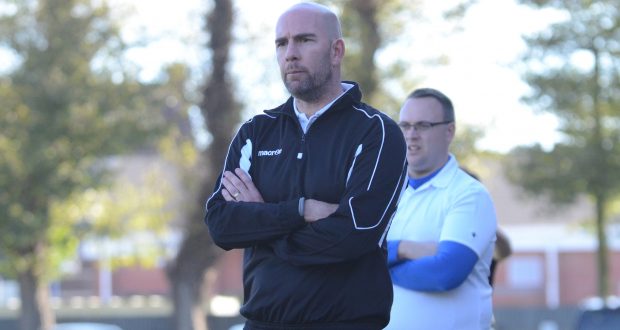 Tulips boss Matt Easton is hoping to add some attacking options to his squad. Photo by JAKE WHITELEY

The all-Evo-Stik League Division One East tie at the Sir Halley Stewart Playing Field (3pm) offers the Tulips some welcome respite from their league troubles, having failed to win in 11 outings so far.

Spalding’s last victory came in the Emirates FA Cup, when they saw off Wellingborough Town 3-2 back on August 25.

And, having drawn 2-2 with Carlton in the league as recently as October 2, Easton does feel they can use the fixture as a springboard to kick-start their season – especially if he can add to his squad beforehand.

“It’s my job to turn things around here,” conceded the Tulips boss. “We just need to get a win and boost the confidence of the dressing room.

“What is clear is that we need to add some fresh attacking options. We’re looking at three new players and all of them are attack-minded.

“I’m not looking at the FA Trophy for its financial benefit, that’s not really my issue. My issue is to get this team winning games.

“If we can win on Saturday, it will build confidence and should hopefully roll over into the league.

“When we faced Carlton the other week, we matched them and certainly deserved to get something from the game. But it could have gone either way.

“Despite our bad start, we’re not that far behind in the league. So, winning on Saturday and getting that boost could turn our season around.”

Easton could have as many of three new faces in his squad if his transfer targets come off.

But he could be without midfielder Jack Brownell and defender Neal Spafford, who are both carrying knocks.

Opponents Carlton are four points and four places above the Tulips in the league.

The winners of Saturday’s Preliminary round fixture will bank £3,000 in FA prize money.