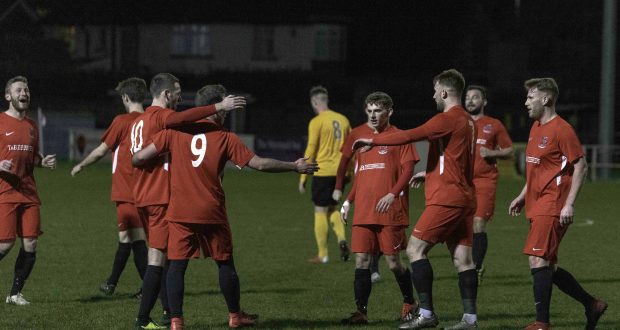 Player/boss Ian Dunn reckons Pinchbeck United have every chance of picking up a result at second-placed Rugby Town on Saturday (3pm).

The Knights, currently fifth, are 12 points behind their hosts in the Future Lions UCL Premier Division table and lost the reverse 3-0 at the Sir Halley back in November.

Rugby have won their last six games on the spin, too, but Dunn has confidence in the ability of his Pinchbeck side as they bid to close the gap on local rivals Holbeach United and Deeping Rangers above them.

He said: “It’ll be a very hard game, there’s no doubt about that.

“Rugby are a good side, but they did drop points against PNS recently and only just beat Whitworth 2-1 at the weekend.

“We’ll have to see what we can do, we’ll certainly go there believing that we can get something.

“The pitch will suit us and we’re starting to gel nicely as a team now, so if we can get at least a point, we’ll be very happy.

“We obviously want to hold onto fifth place at the very least, but going to Rugby and getting a result would put a bit of pressure on the likes of Holbeach, while Deeping look catchable again.

“I’ve heard it said that we should be higher because of our budget. But we’re an evolving team at this level. The aim is to keep this group and add to it ahead of next season, as we’d need no time to gel.”

Pinchbeck will have to do without striker Harry Limb, having failed to agree a deal to bring him back to the club from King’s Lynn. Andrew Tidswell is also injured, but Liam Adams has extended his loan from Stamford for another month.

The Knights go into the game in a confident mood, having beaten Harborough Town 4-1 at the Sir Halley Stewart Playing Field on Wednesday night.

Callum Steer (65) hit back for the visitors, but Dunn’s side saw the Future Lions UCL Premier Division clash out well to win one of their games in hand on the four above.

The player/boss said: “It was a fantastic performance, I’m really pleased.

“We started well – before the game we spoke about playing high up the pitch, playing at a high tempo, forcing errors and winning second balls.

“I think we did that from the off and did it really well.

“We fully deserved the 3-0 lead at half-time and asked for more in the second half, but we tired a little bit which was to be expected. We saw the game out, though.

“They scored a good goal from a corner, but apart from that we managed the game well and were full value for the three points in the end.”