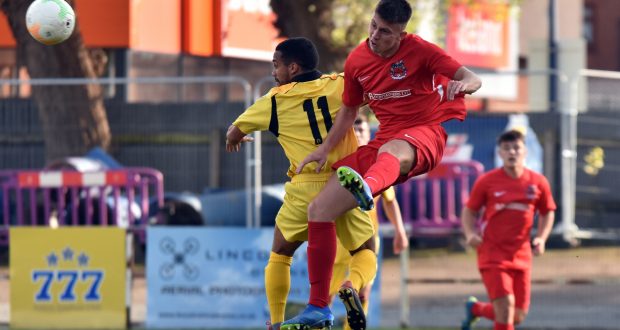 “Embarassed” Ian Dunn admitted that he was at his lowest ebb as Pinchbeck United boss after seeing three players sent off in a 5-1 defeat at Boston Town on Tuesday night.

James Gordon pulled one back just after the break, before Pinchbeck hit the self-destruct button and had Niall Hylton, Nathan Kelly and Tony Edwards sent off in quick succession.

The eight men shipped further goals to Patrick Muirhead and Beck, making it a horror night for Boston-based Dunn against his former team.

“I’m absolutely embarrassed,” said the veteran striker. “This is my lowest point as manager of Pinchbeck.

“It doesn’t happen very often, but I’m speechless. I’m just gob-smacked by what I saw out there.

“We weren’t at it at all in the first half and it was all very lacklustre, but all three goals were avoidable.

“Then we got ourselves back in the game with a goal early in the second half and began to ask a few questions. If anything, it looked like we might make a game of it.

“But the red cards obviously killed us. They were all avoidable and I’d argue that Nathan’s should have been a sin bin for dissent.

“But we can’t complain too much. It wasn’t even a dirty game, I just can’t explain how this happened. It’ll take a long time to forget about this.”