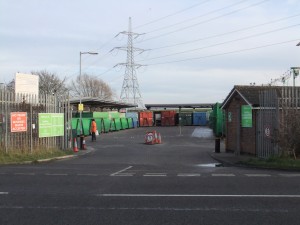 Spalding’s Waste Recycling Centre will close when busiest if drivers queue along the A16 to get in, operators have warned with a controversial booking system to be dumped on September 1.

The West Marsh Road site was described as ‘a thorn in the side’ of the council as in the past police have had to be called when traffic backs up on to the main road, a meeting of Lincolnshire Waste Partnership was told.

That’s not been the case while the booking system implemented as a social distance measure has been in place.

But with Lincolnshire County Council announcing the controversial scheme is to close, officials have said that if cars then queue back on the A16 they will no longer ask police to attend and will instead close the site.

Mike Reed, Lincolnshire waste operations and infrastructure manager, said: “We’ve had many conversations with the site operator and if there are any issues with vehicles queuing on to the main road, they should immediately alert us and we will take a view as to whether the site should be closed to prevent that safety hazard occurring.

“It does happen quite frequently, particularly in the peak summer months when green waste is being presented.

“We have a duty of care to make sure the highway is being kept safe and we’re mindful if things do become hazardous due to queuing vehicles then we have the right and authority to close the site.

“It shouldn’t then escalate to that situation where the police are called as we can make that judgement ourselves.”

Coun Roger Gambba-Jones is South Holland District Council’s representative on the Lincolnshire Waste Partnership and he said the people of the district had been “shouting the loudest” about getting rid of the booking system.

He said: “Spalding (West Marsh Road) is the biggest thorn in the side of the county because of the physical size of it and the type of usage.

“In the most extreme cases traffic rolls all the way back to Enterprise Park when people are so foolish as to decide to join the queue until the HGVs are unable to access the only way to their factories in West Marsh Road.

“That’s a problem that draws the police unnecessarily and they don’t have those resources.”

Speaking after the meeting he said: “The back up of traffic can cause chaos and mayhem on the busiest days.

“The council have said the centre won’t be closed for just 10 to 15 minutes but probably up until the rest of the day.

“People need to understand that they should not join the queue if it’s going to cause a safety hazard.

“Because of its size and location I think people are going to regret losing the booking system in Spalding, especially if they want to see it open throughout the weekend.”

Coun Angela Newton had advocated for the booking system to be ended.

She said: “Rather than issue threats the county council need to ensure staff on site are properly organised and helpful to residents so they can exit the site ASAP.

“Some of the members are not happy admitting they got this wrong and I bet former Coun Eddy Poll wishes he had listened to some of us months ago.”