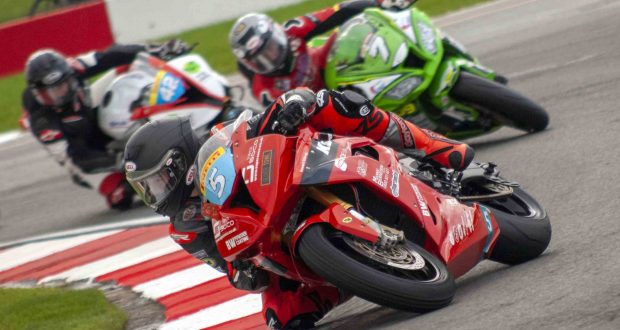 Gutsy Ben Wilson picked up two top ten finishes at the penultimate round of the British Supersport Championship over the weekend.

Still recovering from the double break he sustained at Thruxton a few weeks ago, Kirton speedster Wilson managed finishes of ninth and tenth at Donington Park to move up to ninth in the rider standings.

Wilson was a lot fitter than last time out at Assen two weeks ago and completed his qualifying in 14th place within the mixed grid of Supersport and GP2 riders (11th in class).

As the short, 12-lap sprint race got underway on Saturday afternoon the weather was kind to the riders with dry and sunny conditions. Wilson got away well and settled into 11th place overall and ninth in his class.

Although he was overtaken by some of the GP2 riders towards the end of the race he maintained ninth place in his class to pick up seven championship points.

Starting the longer 18-lap feature race from the fifth row on Sunday, Wilson made up two places on the first lap to settle into tenth place in his class. He lost ground on lap five when Mason Law crashed his GP2 bike right in his path and he did extremely well not to collect him.

Wilson was passed by Ross Patterson on lap 11 and dropped a place back to 11th, but another rider crashed ahead in the final stages and he regained tenth place – which he held over the final two laps to receive six championship points.

The final round is at Brands Hatch over the weekend of October 18-20.

In qualifying the Kirton ace found himself down in 30th position with a lot of work to do to get on terms with the leading group.

However, on Sunday he shot away to make up 12 places on the first lap.

With a wet weather tyre on the front and dry on the rear, the set-up appeared to work for Clarke as he found himself up into 15th position on lap three.

But then the safety car came out to enable the track to be cleared of debris following a crash and when the race was back underway on lap seven he dropped back to 17th before grabbing 16th back late on.

Clarke said: “I am feeling positive as I am improving with every race. It’s been a difficult year for me as I missed half the season after my crash at Brands Hatch but come next year I am confident I will be up there in the points.”

The final round is at Brands Hatch on October 18-20.