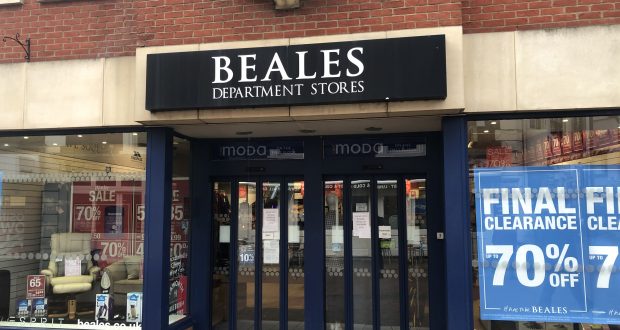 Spalding town centre could be set for two big losses after Marks and Spencer announced it intends to close its food hall while Beales is trying to stave off administration.

And it came the day after the owner of Beales Department Store, which has a branch in Market Place, took to national radio to say it’s looking to go into administration.

They’re the latest two shops in Spalding that could soon stand empty while Bonmarche, which also has a branch in Spalding, has been in administration since October.

A Marks and Spencer spokesman said that they were looking to re-deploy staff.

“Any store closure will happen after the consultation which will take as long as it needs to do,” the spokesman said.

Zoe Gibbard, M&S Head of Region for South East Midlands, said: “Shopping habits are changing, so we’re reshaping our store estate so it is fit for the future, ensuring it meets the needs of customers today – and those of tomorrow.

“Proposing to close M&S Spalding Food Hall is a difficult but necessary part of these changes. Over the coming weeks our priority will be supporting the great team of colleagues at our Spalding store, as we discuss what’s best for them.

“We remain committed to local customers and, if the proposal goes ahead, we will continue to serve them from M&S.com and other stores in the area, including M&S Bourne Food store, where customers can also pick up clothing and home products in store via Click & Collect.”

The news comes after department store Beales announced it too was looking at bringing in the administrators.

The company operates 22 stores, including its Spalding Market Place store, with 1,000 employees nationwide.

“As has been reported we filed an intention to appoint administrators last week.

“Principally what that allows us to do is to carry on working on restructuring to secure a profitable future for our business. We have to work closely with landlords. We have to convince councils they have to come to the party to maintain our presence on the High Street.

“Because of the towns in which we trade, we are the retail heartbeats of that town and there needs to be a cohesive approach from council and landlords. In a number of our stores I pay three or four times more business rates than I pay rent. That can’t be right.

“We’ve only managed to get one council to help us out on a temporary basis. At the moment, in my view, councils don’t care as they get their business rates whether we’re there or not as the landlord pays them and that has got to be a short term view of life.”

Councillor Nick Worth, South Holland District Council Deputy Leader and Portfolio Holder for Growth and Commercialisation, said: “We are sorry to hear the news about Beales and our thoughts are with those who are employed both directly or indirectly in the district who may be affected.

“We as a council try to do our best to support any business in the district.

“The last known contact we had with Beales was in May 2019 and to the best of our knowledge they have not requested business rates relief, but we would be keen to sit and talk to them to look for ways forward. The council does have a discretionary rate relief policy and we would be happy to discuss this and other options to reach an amicable solution to help them remain in Spalding.”

On Marks and Spencer, Coun Worth continued: “It’s with great sadness to hear of potential job losses and the loss of a major retailer for the town.

“M&S have recognised how shopping habits are changing and customers are ordering more online. We as a council recognise how high streets are changing and one of our focuses this year is how we can work with businesses and residents to make our town centres fit for the future. We will be reaching out to M&S shortly to see if we can help and support anyone affected by this proposed closure.”