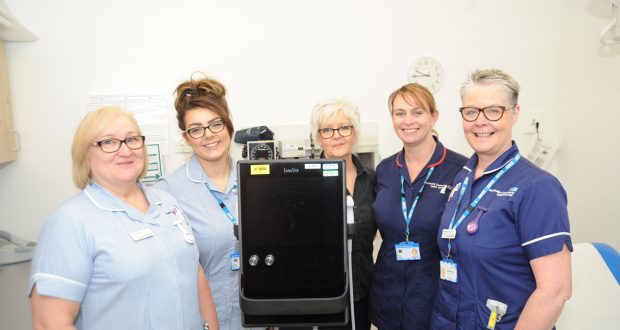 A brand new scanner that it’s hoped will improve waiting times at Johnson Hospital is up and running thanks to charity funds.

The £26,000 ultrasound scanner has been purchased by the hospital’s League of Friends partly with donations from the thousands raised by the Johnson Hospital Ball.

The Venous Ablation machine can look at veins and arteries and as it’s much smaller than the other ultrasounds at the hospital, it can easily be moved between wards and clinics where it’s needed. 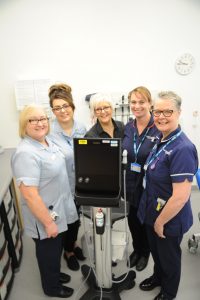 Outpatient sister Sally Brown said: “We had to share the ultrasound scanner with the antenatal ward so it was only available on a Friday.

“This new scanner is much smaller and can be used for a number of clinics.

“It gives us more scope to increase services and stops patients having to travel to the Pilgrim and Peterborough Hospitals.

“Before patients would have to come for a consultation, then might have to come back for the scan, but now they can have it done on the day.

“It will improve things in terms of waiting and has been a brilliant thing to have so far.

“The League of Friends provide fantastic support for us and it’s great to be able to support them by putting on events such as the ball and are forthcoming darts event.”

Instead of a ball this year, the organising committee is holding the Pro Darts Charity Showdown at the Springfields Events and Conference Centre on September 20.

Tickets are available via the website EventBrite and range from the VIP package at £65 with a meet-and-greet and waitress service; to the bronze £22.50 unreserved standard seating.

Tables can also be sponsored at £50 and other sponsor help would also be welcomed.