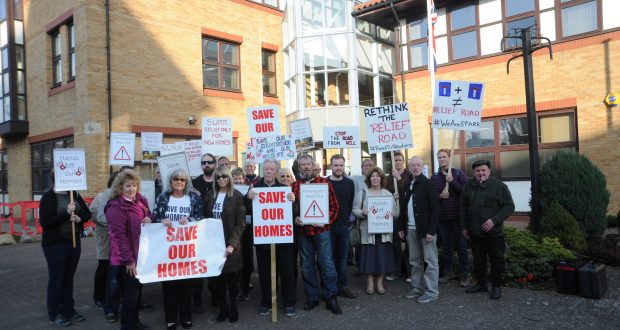 Bourne Road residents have expressed disappointment as a decision on whether their homes could be demolished for the Spalding Western Relief Road has been delayed for a few weeks.

Those affected say Lincolnshire County Council told them they would have an answer as to where they would like the central section of the route to be built earlier this month.

But this week the authority said no decision would be made at least for another two weeks.

A Lincolnshire County Council highways spokesperson said: “It’s taken slightly longer than expected to complete our assessment and feasibility study. However, we expect to have it finished in the next two weeks, at which time we will contact those potentially affected.

“Once complete, the report will be put forward to the Highways & Transport Scrutiny Committee for discussion and then to the council’s Executive for a final decision.”

One of the residents affected, Catherine Roberts, said: “It is disappointing, after a long stressful summer, we have to wait until October to hear our fate.

“We were promised a decision in early September.

“We can only hope that common sense and humanity has prevailed, and an alternative has been found.

“It will certainly be worth the wait, if no-one in Bourne Road has to lose their home in pursuit of the central section of the road.

“We have recently handed in the petition to Lincolnshire County Council, just over 1,300 signatures in all, and thank everyone in Spalding for their show of support.

“It has been tremendous, and the comments and best wishes received have helped keep us resolute in the belief this is wrong, and the route has to alter.

“Should houses still be in the firing line to be bulldozed, we hope we will be given the opportunity to enter into meaningful discussions with the council.”

Lincolnshire County Council says it also has also not heard anything with regards the central government call-in that the first two sections of the road are subject to.

The authority’s own planning committee passed plans for those sections but after a submission from South Holland and The Deepings MP, Sir John Hayes, the government is considering whether to call-In the planning applications, which would mean it would decided on whether work on the sections could begin or be refused.