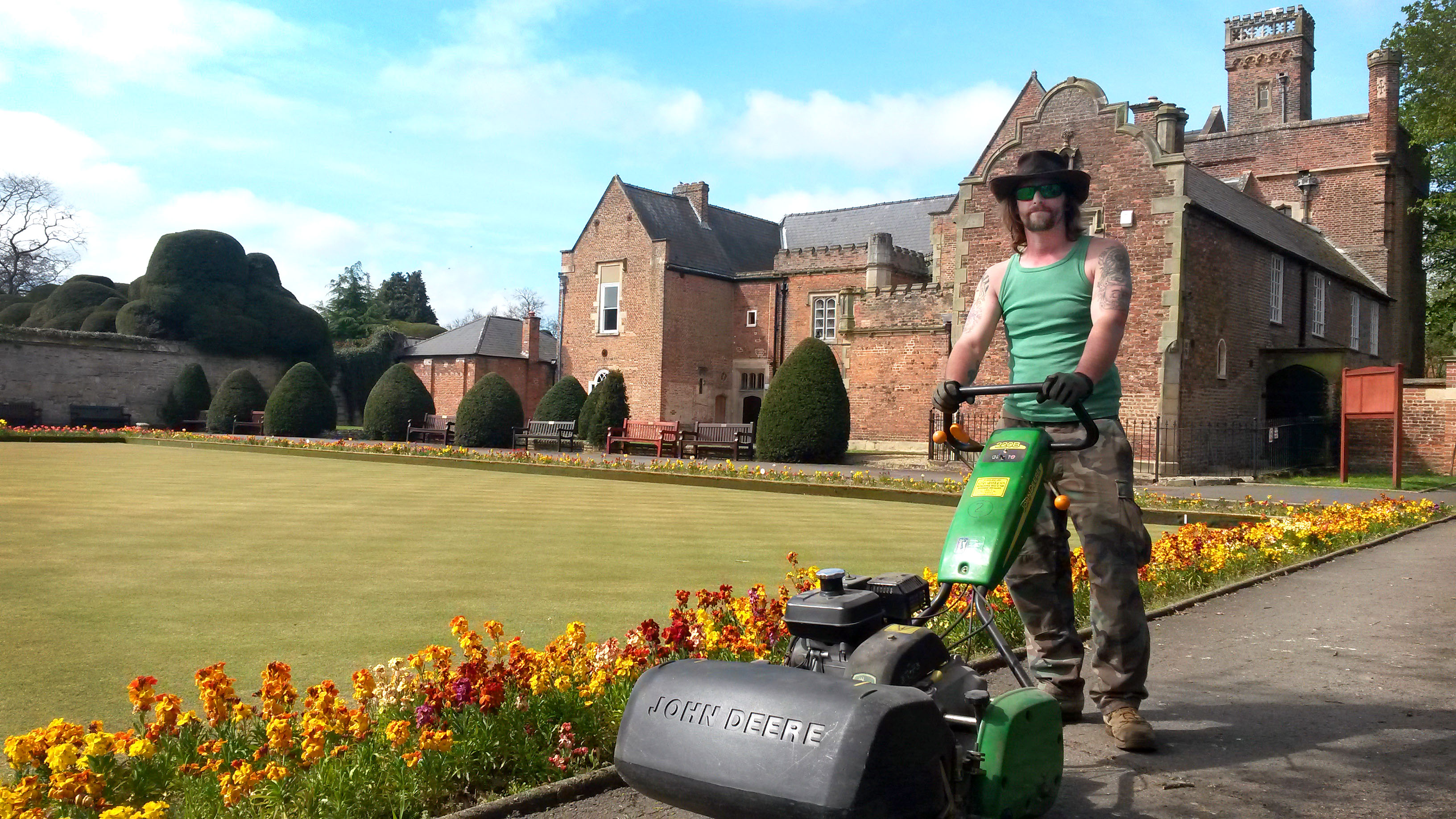 Ayscoughfee Gardens has a fleet of seven mowers for the variety of cuts required. Dan has just finished trimming the bowling green. To the left of the photo are the taxus baccata trees, which he is “honoured” to look after.

Ayscoughfee Gardens looks fantastic year-round and is one of Spalding’s top attractions.

The way it looks and how it is run is down to the hard work and dedication of Dan Cooper and his staff.
Head gardener since 2008, Dan (39) has a wealth of horticulture and agronomy knowledge and keeps the gardens in top shape, with the help of fellow South Holland District Council employees Jeff Drakard and Gordon Wilson.

Dan joined the Ayscoughfee team in 2004 as an understudy to Frank Markham. After a short spell looking after the banks of the River Welland and Coronation Channel, Dan returned to the Churchgate gardens as head gardener to succeed retiring Frank.

Dan said: “I do this job because I love the site.
“I love the history of the setting and it’s an honour to look after those,” he said pointing to the beautifully-maintained taxus baccata trees between the pond area and South Lawn.
The work of the team – which is supported by three volunteers – varies with the season, but Dan gave an insight into his work at this time of year.

7.20am: Dan completes the commute from Peterborough and opens up the gardens for the day. 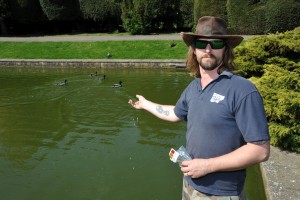 Dan with duck food which will be introduced soon to discourage people from throwing in bread, which is potentially harmful to the wildlife. Photo: VNC210415-58

7.30am: First task is to feed the fish.
Then he sets up the irrigation system in the low-hedged Peace Garden, one of a number of areas which give Dan pride.
“It’s a parterre-type garden, which originated in France in the 1700s. The idea is you look down on it from above,” he said.

8am: Next job is brushing the bowling green, in two directions twice.
The beds surrounding it look splendid, but soon the winter plants will be replaced with summer bedding. A total of about 12,000 geraniums, begonias and sophinias are planted around the gardens to replace the 10,000 wallflowers and 9,000 tulips from the winter.

9am: The birds in the aviary are fed, a daily routine.
There are about 40 budgies, 30 cockatiels, 20 finches and a few rescued birds.

9.30am: One of the two John Deere 220B lawnmowers used on the bowling green is collected for repair. The other one is returned and Dan sets about realigning its levels before getting to work with it.
The green is cut three times a week (Monday, Wednesday, Friday) through the bowling season (April to September) unless it’s a really dry year when just a couple of trims suffice.
Dan has seven petrol mowers at his disposal. Two Hayter Harriers, a Honda, an Atco Balmoral and a two-stroke Victor used on the angled banks of the pond complete the collection.

10.45am: Dan has a quick word with district council dog warden Rachel Thompson who has dropped by to refresh the pest control in the aviary.

11am: A couple of people turn up for a “roll-up” on the bowls green and Dan heads off to the games store to collect the fee and issue equipment.
He grabs a quick coffee before gathering up the putting course ‘flags’ in readiness for its trim.

12.30pm: Time for a quick sandwich on the go, often grabbed from the cafe. Dan then moves on to cutting the South Lawn (to the side of the museum). It’s done once a fortnight and a ‘path’ is cut through the middle of it.

1.45pm: A quick nip to Bourne to bag up and bring back a donation from a member of the public – more fish for the pond. It’s rare that the pond is restocked.

2.45pm: It’s another nice day weather-wise and it’s busy in the park. This does mean that Dan is restricted in what he can do because he has to keep a watchful eye on all areas. One of his many responsibilities is for the welfare of the public while on the site.

3.30pm: Time for Dan to clock off, but the good work will be continued by his team, who today are on the noon-8pm shift. Ayscoughfee Gardens is generally open from dawn until dusk and at this time of the year closing time stretches out until the latest point of about 9.30pm.
Tomorrow Dan will be back to open up again ahead of another host of varied jobs to keep the public park looking splendid.