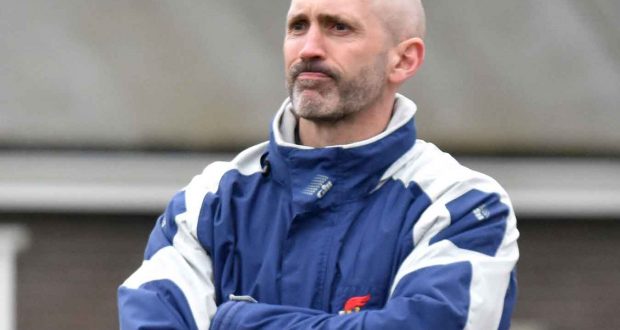 Missing a host of key players for the final, the writing looked to be on the wall for the Tigers at Kiln Park when Kieran Fitzgerald nodded home an early opener for the runaway league winners.

Josh Ford had other ideas and levelled from the penalty spot just past the half-hour mark, but man-of-the-match Adam Confue wiped out their momentum with a scrambled second for Town just before the break.

That’s how it stayed until the closing stages, when sub Adam Creaney sealed the victory – and indeed the double – for his side from the penalty spot.

Tigers boss Danny Hussed refused to be too hard on his side, but admitted that Daventry deserved their success.

He bemoaned individual errors once again, but felt missing three key players made a tough task mission impossible for his charges.

Hussey said: “It’s never nice to lose – but they were the better side. The mistakes that we’ve made cost us again.

“But credit to the boys. We were short with Spencer Tinkler, Joe Braithwaite and Jonny Lockie out, who are all big players for us.

“We haven’t got the biggest of squads and we even had to ask the league’s permission to use Cal Madigan and Dan Dougill to reinforce the squad.

“Overall, not just today but during the season, it’s been an eye-opener for me. I think we blew out at the end really and Daventry’s quality shone through in the end.

“They are a well-oiled machine and didn’t make the mistakes that we’ve made and were stronger in the key areas.

“The summer rebuild has already started. I’ve already met up with a couple of key players and will have other meetings coming up.

“I’ve invited everybody back for pre-season and told them that, if they’re coming back, they’ll need to do some work beforehand as it’ll be hard.

“Fitness-wise, if you look at the lads in the final, they were blowing and haven’t kept themselves in good shape. They’ll need to be fit, or they won’t be involved.

“I’ve already identified players that we need to improve the squad and it will make for a pre-season of hard work for them.

“Obviously it would have been nice to win the cup final and it’s disappointing not to finish fourth, but it wasn’t to be.

“I need players here that can grind out results all season, like Daventry have done.

“We’ve not had that quality and that’s why we’re sitting fifth and they are winning trophies.”

After a largely even start at Kiln Park, it was champions Daventry who drew first blood following their first period of real pressure.

After Ricky Drury had turned Adam Confue’s speculative strike past his far post, the Tigers failed to clear the corner and were eventually punished by Fitzgerland’s flying header at the near post on eight minutes.

That settled the double-chasers right down and they began to slowly control the play, without ever creating too much.

However, the Tigers hauled themselves level on 33 minutes when Will Bird was fouled in the area.

It looked a soft one, but Ford wasn’t going to look a gift horse in the mouth and fired his spot-kick into the corner.

Daventry are Premier Division champions for a reason, though, and they edged back ahead before the break after an almighty scramble in the six-yard box.

A great break down the right from Joe Merrill kicked off the chaos, with influential midfielder Confue credited with the final touch from very close in.

Daventry looked to be buoyed by their second goal and bossed the early stages of the second period, with Phil Cassidy guilty it blazing a great chance over the bar from the edge of the box.

Sub Adam Creaney also lashes a free-kick wide, before Cassidy narrowly missed the near corner of the net with a low strike from distance.

There was a sniff of a chance for the Tigers on a rare foray forward, as Jack Smith charged past a  few men and released Billy Smith. The winger looked to be in on goal, but was only able to deliver a cross for Bird, but Daventry cleared.

Back at the other end, Taylor Orosz really should have put the game to bed when he scuffed a Confue cross straight into the arms of Drury from close in.

Orosz went even closer ten minutes from time when clean through on the left, but Drury produced a stellar save to turn his low drive beyond the post.

There was no denying Daventry three minutes later, however, with Creaney converting from the spot after a Holbeach handball in the box.

The third goal was just about a fair reflection of the final on the day, with the Tigers left to lick their wounds in the final for the second time in four years.