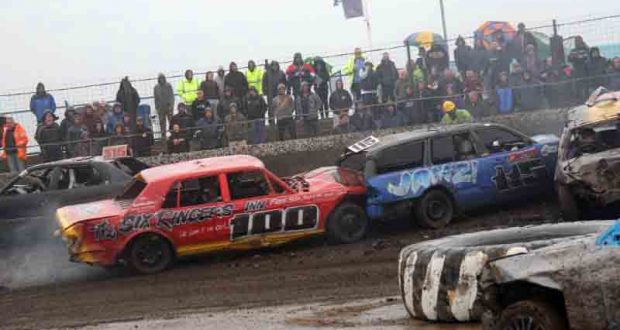 BANG! Callum White (100) goes in with a customary big hit. Expect more of the same on Saturday. Photo by Damien Widdows

Firmly established as one of the biggest Unlimited Banger races, particularly on shale, the event drew a big field of almost 100 bangers.

They put on a tremendous show alongside the no-holds-barred saloon stock cars.

There aren’t many rules when it comes to banger racing – drivers are even allowed to go the wrong way on the corners to stop the opposition.

That is just what White did, taking out one of the race favourites and multiple champion Jack Overy by going the wrong way and stopping him head on.

White’s night finished with a very wrecked Jaguar, but he is certainly one of the fan favourite’s when it comes to entertaining as he doesn’t mind who he attacks.

This weekend sees the biggest stock car event of the year – the BriSCA F1 World Championship – with fans and drivers from overseas heading to the arena.

These are the best stock car racers in the business and it’s expected to be a huge event.

Saturday will see over 100 stock cars entered, while there is a specific meeting for the overseas competitors on Friday night which should see almost 70 stock cars in action.

Visit www.stockcar-racing.co.uk before attending for full event details, including pricing.

Because of the nature of the event it does differ to the usual pricing and officials are expecting it to be a very busy stadium, but not a sell-out.

Tickets will be available at the box office from 12.30pm on Saturday.