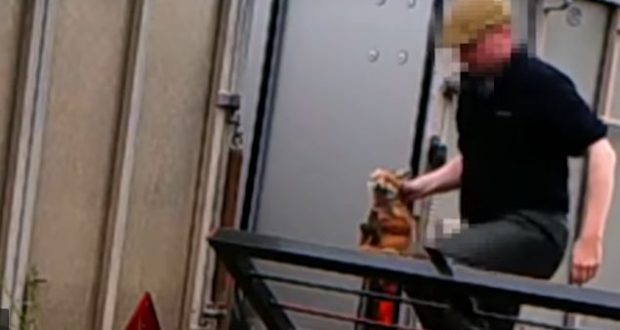 A still image of Paul Oliver carrying a fox cub, from the video filmed by Hunt Investgation Team.

A Long Sutton man and woman have received suspended sentences after being found guilty of causing an animal unnecessary suffering after a court saw video evidence of fox cubs being fed to hunting dogs.

The couple denied the charges in court, with Oliver claiming that he killed the fox cubs with an axe rather than feeding them to dogs.

He denied throwing their corpses into the kennel.

Rose denied any knowledge of the deaths.

The case against the defendants was brought about after activists filmed them preparing dogs for hunts with the use of fox cubs.

Hunt Investigation Team filmed four fox cubs being moved around the South Herefordshire Hunt kennel complex in 2016 before two were taken, one by one, into the hounds. The judge believes they suffered the same fate.

The judge also believed evidence from the prosecution that the fox cubs would not have died instantly.

Martin Sims, director of investigations at the League Against Cruel Sports and former head of the police’s National Wildlife Crime Unit, said: “We believe the incidents show that hunts are clearly still hunting as the poor fox cubs were thrown into the kennels to give the hounds a taste for blood.

“The barbarity of these incidents is sickening and will horrify the vast majority of the British public who are overwhelmingly opposed to fox hunting.”

Deborah Marshall, spokesman for the Hunt Investigation Team, said: “We will continue to expose cruelty and wildlife crime and our message to hunts everywhere is ‘Expect Us’.”

On Monday, former huntsman of the South Herefordshire Hunt, Oliver was sentenced to 20 weeks in prison reduced to 16 weeks on mitigation.

All four counts to run concurrently, suspended for one year. He was also ordered to pay £300 costs and a £115 victim surcharge.

Former kennel maid Rose was sentenced to 16 weeks in prison reduced to 12 weeks. The three counts to run concurrently and suspended for one year.

In the same case, two people pleaded guilty to the same offence.

Julie Elmore (55), of Brynarw estate, near Abergavenny, and Paul Reece (48) from Itton, near Chepstow in south Wales, were both given a judicial discharge for six months.

Both were ordered to pay £50 costs and a £20 victim surcharge.

During the trial, ‘Terrierman’ Nathan Parry (40) was cleared of four animal cruelty charges.