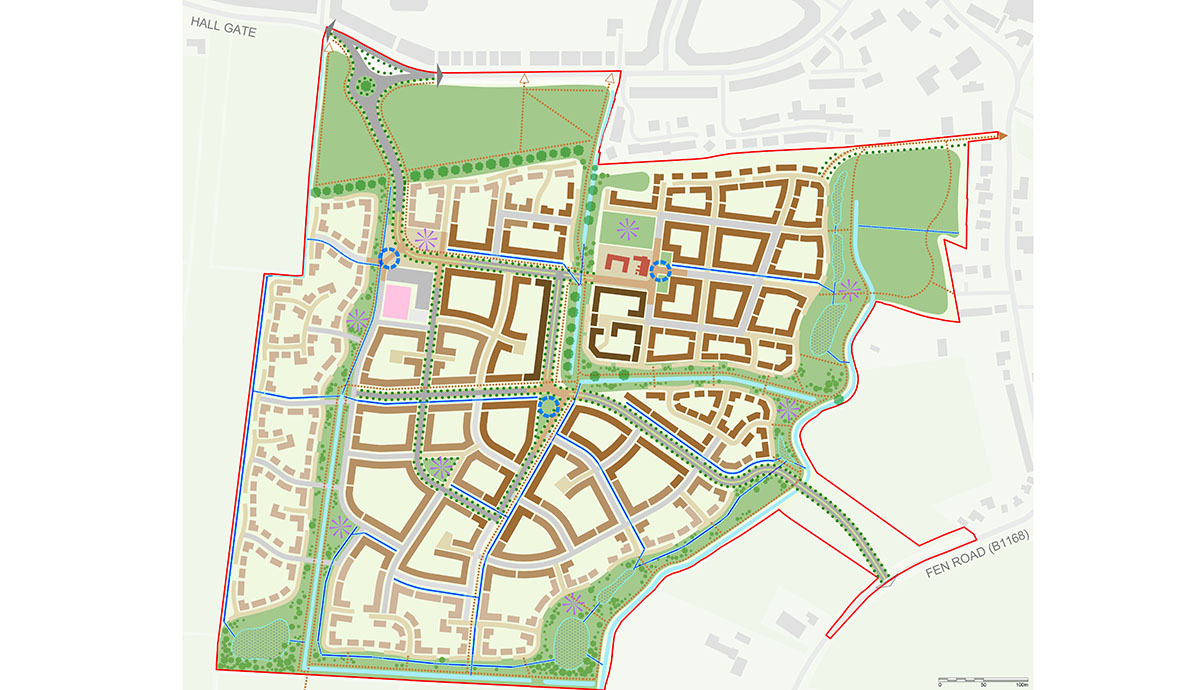 Outline planning permission has been granted for 900 homes in Holbeach.

Despite strong opposition from some district councillors and residents, Holbeach Parish Council and MP John Hayes, South Holland District Council’s planning committee voted 10-4 to pass the principle of the scheme at Manor Farm (between Fen Road and Hallgate).
As part of a Section 106 planning package worth £7.5million, applicant Ashley King Developments will contribute towards construction of a roundabout at Peppermint Junction (where the A151 meets the A17), build a primary school on the site, and buy and fund a Call Connect bus for several years.
Andy Ward, of the applicant’s agent RG&P, told Wednesday’s meeting that there would also be improvements to the town centre and a “substantial” drainage system for the new homes would benefit existing nearby properties.

But ward member and council chairman Francis Biggadike remained unimpressed. He is against development on the good quality agricultural land and questioned why funding the roundabout was a factor.

“There is no direct link between this site and Peppermint Junction,” he said. “If Lincolnshire County Council had done the right thing they would have built the roundabout 25 years ago. It’s not right that Holbeach should have to suffer a plan on this scale to put right their mistake.”

Coun Bryan Alcock (Crowland and Deeping St Nicholas) added: “The expansion of Holbeach is being directed by this application.”
And he felt the proposed density of properties ranging from 20 to 50 per hectare for “an open countryside site” was “ludicrous”.
Portfolio holder for housing Coun Christine Lawton (Spalding Wygate) was the first to declare support for the plan.
“We need 600 houses per year, it was just over 200 last year,” she said.
“If we accept the need for housing, we must accept that it must be shared across the district and I’m afraid we can’t put up ‘full up’ signs.”
Coun Harry Drury (Spalding St Mary’s) would be happy with half the number of properties to reduce the short-term impact on the town. However, committee chairman Coun Roger Gambba-Jones (Spalding Wygate) felt that a ten-year span for completion was “ambitious” and perhaps twice that period was more realistic.

Long Sutton member Andy Tennant pointed out that there are benefits to a town taking on a housing development of this size, and he’s seen Holbeach on the slide.
“It’s hard not to notice that there seems to be another pub or shop closing, so there’s an argument that Holbeach needs some impetus.
“One major problem that Holbeach has still got is traffic through the town centre. Improving access onto the A17 will mean you only have traffic that needs to go through the town centre going doing so.”
Committee vice-chairman Coun James Avery (Pinchbeck and Surfleet) said the application was a reflection of the success story of South Holland in recent years, with businesses moving here or expanding. They need employees, who in turn need homes.
“If we need five to six hundred per year, [this scheme] is a drop in the ocean,” he added, before moving the planning officers’ recommendation to grant consent.
The meeting heard that the latest Local Plan – which consults upon and sets out acceptable areas in the district for future development – is under way, and Holbeach could be expected to have a “significant number” of houses.
Coun Alcock said: “I’m uncomfortable with this scheme being inflicted on the people of Holbeach without the people of Holbeach being able to show their preferences through the Local Plan.”
Coun Laura Eldridge (Long Sutton) was concerned that there was no mention of extra secondary school provision with the application, while Fleet member Peter Coupland fears the creation of “serious congestion” in the town centre.
The S106 money ought to go towards a health centre, according to Coun Grocock, but Coun Gambba-Jones said without a promise of health services being provided within a building it would be pointless. He had seen a similar situation with Broadgate Homes’ development at Wygate Park.

Long Sutton member Jack Tyrrell had the final word, insisting that a developer prepared to spend £7.5million on local infrastructure was a rare opportunity and should be welcomed.

What do you think about the plan and what was said at the meeting? Email letters@spaldingvoice.co.uk