An artist's impression of the proposed outdoor performance area, minus detachable acoustic panels which fit to the rear of the structure.

A proposed outdoor performance area for Ayscoughfee Gardens could be “Lamborghini” quality with Lottery funding support, Spalding Town Forum has been told.

The current controversial design – which some say is not suitable for purpose, partly because user groups were not consulted – has been put on hold while the possibility of extra funding is explored.
More than two years on from the forum initially discussing using Springfields S106 money to fund the project, it was back on the agenda last week.(March 16)

Council officer Paul Jackson told members that the current design – granted planning consent in January – was as good as they should expect for the £57,000 budget.
However, he said there had been a “sea change” since the project was first discussed, due to the Lutyen war memorial’s recent upgrade to Grade I listed status. This could potentially open a lucrative funding opportunity. 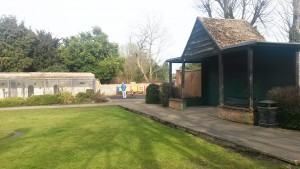 The wooden structure due to be replaced with the new performance area.

Referring to the current brick and wood pavilion, Mr Jackson told the meeting: “What you’ve got as a building is a Skoda, a 1974 Skoda. What you might be able to get is a Lamborghini.”
Heritage Lincolnshire was commissioned, for an undisclosed sum, to create the current design, which has attracted some harsh criticism.

Mr Jackson said: “I resent this being referred to as a bus shelter. The one that’s there looks like a bus shelter.
“The design process has been severely constrained by the financial constraint.”

Coun Roger Gambba-Jones – chairman of South Holland District Council’s planning committee – was frustrated by calls for the project to be reviewed, using further officer time. He wanted Coun Graham Dark (chairman of the Friends of Ayscoughfee and lead objector to the current design) to liaise with user groups and come up with a fresh proposal.

Coun Harry Drury, whose ward encompasses Ayscoughfee Gardens, spoke in favour of the design at the January planning meeting. He fears for the delay a new consultation process will bring.
“If we are going to be sitting here in two years’ time then we are going to be four years from when we first started out,” he said. “I agree that user groups should have input but they could have quite easily come and consulted when it was out for planning, but I don’t think they did.”

Mr Jackson reiterated his offer for officers to seek extra funding and engage with user groups. He committed to reporting back to the forum’s meeting in six months’ time. 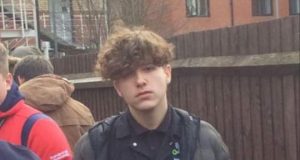 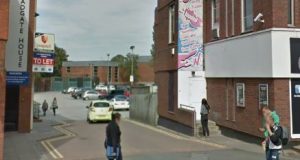