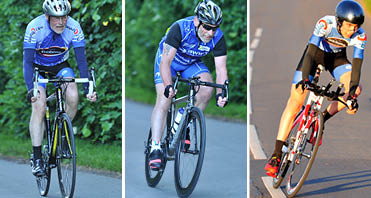 Spalding Cycling Club’s 17-mile Time Trial League events have a very similar feel to those of 2016 with rounds two and three both being affected by weather and competitor numbers.

Round two of the 2017 series, held in very warm and sunny conditions, attracted 15 starters – nine club members and six guests which was a stark contrast to 2016 when heavy rain meant only four competitors took the start.

Despite some of the riders still recovering from the Open 25 and the heat possibly affecting others the quality of racing was exceptional.

Although Velo One’s Neil Palmer’s time of 36.34 was outright fastest on the night a real battle was being fought just behind with rising star Matt Ellis getting ahead of the 2016 17-mile league champion Ben Moore.

They posted 38.01 and 38.09 respectively with Ben a scant one second ahead of Velo One’s Josh Wallis.
Third in the club standings went to Andy Bowser – his 39.11 very close to his personal best of 2016.

In what is believed to have been his first 17, Kieran Buffham put in a strong ride to stop the clock in 40.42.

Ross McGivern, who finished second behind Andy Bowser in this round in 2016, was actually slightly slower this time round posting 41.24.

Frazer Wallis, also in a first time ride at this non-standard distance, recorded 41.46 while Chris Bettinson finished with 42.39. Super vets Barry Drew and Brian Johnson completed their rides in 47.11 and 54.33 respectively.

Of the guests, newcomer Lee Thomas of Team Bottrill finished on 39.44 while other regular guest riders Ian Fensom of Fenland Road Club posted 42.26 and Team Swift’s Chris Ward showed he is well on the way to recovery with 43.23.

After the heat of round two, the heavy rain for round three could not have been more of a contrast with only six competitors braving the elements at the start.

Although both guest riders from Velo One, Neil Palmer and Earl Taylor posted times of 37.38 and 39.46, this time it was Ross McGivern who was first club member home in 41.11 – this was a dead heat on time with guest rider Lee Thomas.

Making up the club standings Frazer Wallis had a more cautious ride posting 46.02. Derek Chamberlain, in a rare appearance, was back in 47.02.

Preparation is now underway for the upcoming grass track season with training at the Rugby Club on Friday evenings from 7pm-9pm.

With a series of local events being held in the coming months, including the National Championships at Heckington, the club is looking to boost participation and team numbers.