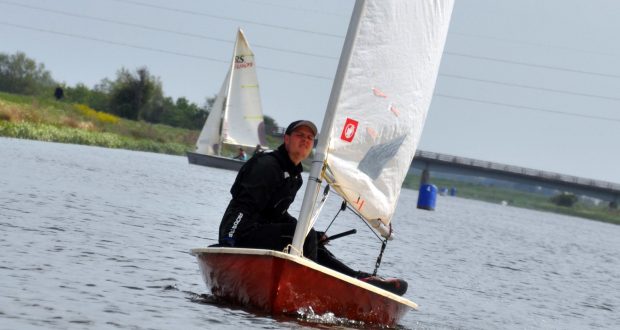 SECOND IS BEST: Tom Bell was the overall winner.

Consistency was key for Tom Bell as he took overall victory at Welland Yacht Club’s Tulip Regatta on Sunday – despite not winning a race on the day.

Ten boats took to the start line for race one on a cloudy day that offered little wind for the competitors.

As they made their way up to the first mark Bell managed to lead around the mark, closely followed by Van Haren then Cox.

Soon, van Haren would take the lead on the way back down the course and they started the second lap the Willerton’s would each elect to take a lap time.

The order remained the same throughout the final lap, as van Haren managed to retain the win once handicaps applied from Bell and Cox.

As the race progressed, van Haren soon made his way to lead around the top mark. But the wind dropped away and, despite leading for the entire race, van Haren could not pull out a big enough lead and fell right back to sixth under handicap.

The win went to Herd from Bell in second and Cox in third.

The final race of the day saw just five boats take to the start – and it was close between Bell, Cox and Herd with Bell just making it first around the top mark.

He opened up his lead on the way back towards the club house finish, by which time the wind had almost died completely.

Cox would take the win under handicap from Bell in second and Cobb in third.

Consistency paid off for Bell as his three second places would earn him overall victory from Cox and Herd.