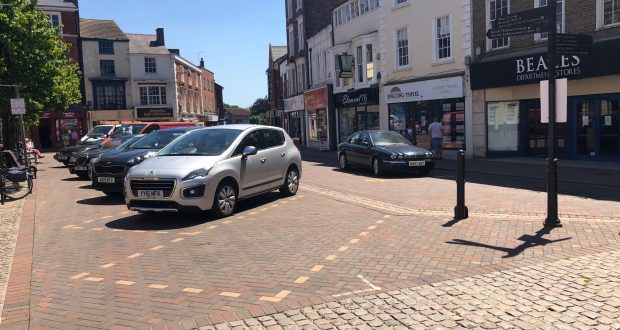 Concerns motorists are flouting Spalding’s day time pedestrian areas have been expressed as a bid to encourage cycling and walking in the town and Holbeach has been announced.

Since COVID-19 lockdown, more cars have been driving through Spalding’s Market Place and Sheep Market when it should be a pedestrian area, even now shops have re-opened.

One member of the public, who wished to remain anonymous, said: “Market Place and Hall Place are designated pedestrian areas between 10am and 4pm, yet no-one is policing it.

“I spoke to one of the SHDC street marshals, they have been told they are not even allowed to talk to the drivers to point out they are driving illegally.

“One guy in a white van was also witnessed entering Hall Place in the wrong direction just to get his lunch from Greggs.”

Sergeant Rick Mosley, of Lincolnshire Police, said: “There is a traffic order in place which places restrictions on vehicles entering the Market Place between certain times of the day, depending on the day of the week and market days – with certain exceptions.

“Now COVID-19 restrictions have been eased, Spalding town centre is naturally becoming busier with vehicles and pedestrians which has resulted in an increase in vehicles contravening the TRO.

“The Neighbourhood Policing Team patrol the town centre frequently and will deal with any offences they come across, and will continue to do so.

“I would ask that should anyone be concerned about vehicles breaching the order, they contact Lincolnshire Police to report it through the website or by calling 101.”

A spokesman for Lincolnshire County Council said: “It is disappointing to see drivers contravening the traffic regulations in Spalding Market Place, which have not changed.

“The police have the power to enforce the road closure, and we will continue to enforce parking restrictions.”

Meanwhile Lincolnshire County Council, the authority responsible for highways in South Holland, has submitted plans to the Department for Transport for funding to make changes to town streets to make them more suitable for pedestrians and cyclists. What work is carried out will depend on how much the Department of Transport gives the county council, a spokesman for the authority told The Voice.