There’s been a call for councils to work together on funding from developers amid concerns proposed changes to the planning system will leave Lincolnshire with ‘much lower’ contributions.

In South Holland, larger developments can only be given planning permission when an agreement between the developer and district council to mitigate negative impacts of developments is signed, known as a Section 106 agreement.

It usually involves agreed funding contributions for infrastructure such as roads, schools and healthcare and councils can set timescales on when that’s provided, such as before work starts or when a certain number of homes have been completed in a housing development.

Along with what it describes as simplifying the planning process, the government’s white paper ‘Planning for the Future’ aims to replace Section 106 and the similar Community Infrastructure Levy that three of the six district councils in Lincolnshire use with a new levy.

That could include developers only providing contributions after developments are completed and the raising of the threshold of when a housing development is big enough it needs to pay levies from ten houses to 50.

The review states: “The Scrutiny Panel recognised that a more joined up approach between the county council and the district councils would enable more collaborative partnership working to maximise the benefits from developer contributions to the residents of Lincolnshire.

“This will be even more crucial if the proposals for developer contributions in the white paper are introduced which could see the county receiving much lower levels of funding in the future.”

The review was discussed at last week’s meeting of the county council Executive where Coun Nick Worth, said: “The government paper is proposing that the contributions be paid at the end which does have a major implication for the county having to forward fund a lot of these infrastructure schemes and I can’t promise if I was a developer and didn’t have to pay until the end of the scheme, what’s the incentive for me to complete the scheme.

“There’s quite a number of issues that the government need to look at.

“It’s key for the county and district to work together flexibly as much as possible. In my part of the county we manage to do that most of the time.”

County council leader Martin Hill added: “What we don’t want is all the housing before the infrastructure. I sometimes wonder if the government don’t seem to realise that in Lincolnshire we’ve had examples in the past where there’s been a trigger for infrastructure being provided and the developer finishes just before the trigger and moves on to some other site to start developing that.

“This is completely unacceptable and the government needs to look at it closely or we’ll be left with terrible congestion and problems due to some developers knowing they can play the system.

“We need to be robust in our response in the white paper.” 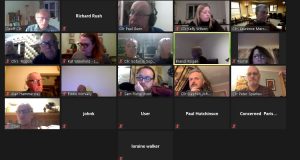 Family’s site is given approval