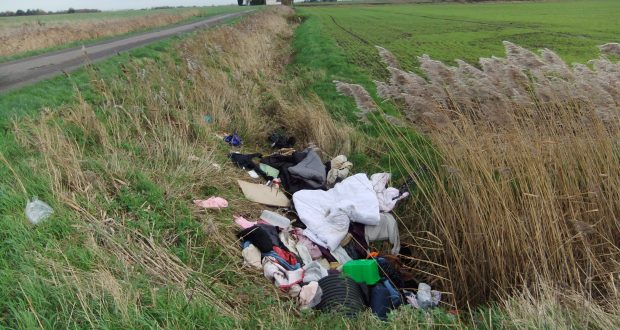 Councillors in Lincolnshire are calling for the government to do more to combat fly-tipping in the county amid claims some land owners are having to remove them from their land on a daily basis.

A meeting of the Lincolnshire Waste Partnership last week heard that the county was seeing ‘the beginning of a really ugly trend” in waste disposal according to its member Christian Allen.

The meeting also heard that some fly-tips were thought to be carried out by companies offering to be paid to take waste away before fly-tipping it rather than getting rid of it legally.

Richard Wright, of Lincolnshire Leaders and Chief Executives, said: “It’s disgraceful the amount that’s being dumped, the amount it costs the public purse and the landowners.

“It’s getting out of hand.

“I’m trying to get it out there to the public that a cheap deal is a dodgy deal.

“A cheap deal to take your waste away will cost in the long term as it will have to be cleaned up.

“Can the partnership also look at lobbying government for stricter penalties?

“A lot of those who are fly-tipping are laughing at the level of penalty, given the amount of money they can make, especially for these commercial dumps they do.

“They must make a fortune on it to run the risk of being caught.”

South Holland District Council’s representative on the partnership, Coun Roger Gambba-Jones said: “One has to have sympathy for our farming community as they’re left to fight this battle on their own.

“They can’t plug every gap in the land they own because it causes them no end of problems.

“Once these people have blighted their land they’re left with the bill which often runs into the many thousands.

“That’s because what’s dumped is often the worst of the worst.

“Now it’s not just happening monthly, not just weekly but sometimes daily, they’re dealing with this stuff when they’re, in some cases, already on the edge of financial ruin from many issues, not least COVID.

“I think it’s time there was some government assistance or campaign that routed some of the money available from manufacturers or whatever sources in the court system to the victims side and assisting the farming community.”