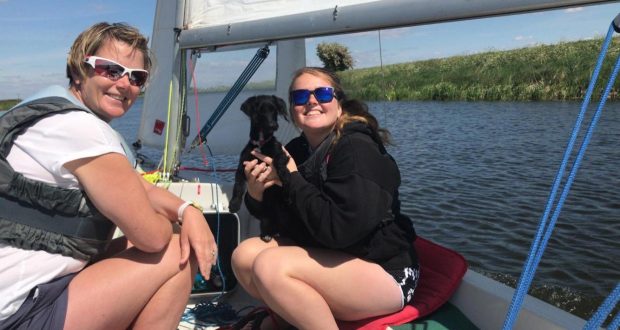 BACK ON THE WATER: Kiala Burton left with daughter Lucy and Daisy the dog are among those that can train but Welland Yacht Club’s 70th anniversary season is still on hold.

The Spalding club has been a fixture on the local waterways for seven decades this summer.

But they’re yet to test the waters after the COVID-19 outbreak led to the postponement of the summer season that was due to start in March.

A special open day that was due to also double as a 70th birthday celebration in May also had to be cancelled.

But they are hoping that the lack of income due to COVID-19 won’t be too difficult for the club.

Spokesman Mark Holland said: “The club is reliant on various social events and we rent the clubhouse out to a couple of other clubs to help with the running costs and obviously this hasn’t been the case so far.

“It will be a challenge but I believe there is help available from the local authority.”

The relaxing of lockdown has led to individuals or households being allowed to go out on the boats.

Welland Yacht Club says it’s complying with the Royal Yachting Association (RYA) and its guidance on when the club members can get back competing.

Currently club members have to notify the club’s WhatsApp group if they’re going to go out in their boats to as not to pose risk of too many being on the water.

Mark added: “As we are a RYA affiliated club we will take our lead from them.

“At the moment competitive sailing at the club is still a long way off but this may change in any updates from RYA.”