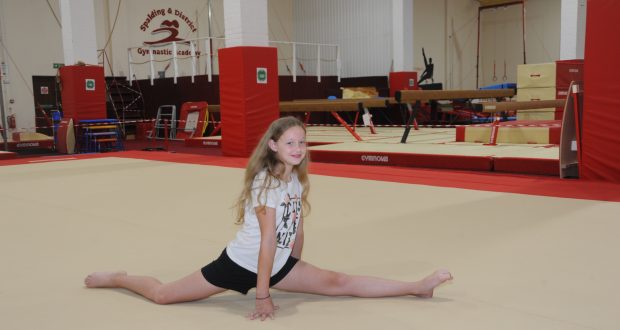 WE’RE BACK: Poppy Payne (10) is among the gymnasts returning.

One of the county’s largest gymnastics club has re-opened its doors after the enforced break.

The COVID-19 outbreak led to one of the longest breaks Spalding Gymnastics Club’s has had since its formation in 1976.

But last weekend its squad gymnasts returned to Cradge Bank and its virus-safe layout and recreational users can come back in from this week.

The club currently has between 400 and 500 members.

Alec Harding has been involved with the club since the start and oversaw the move into the current premises 13 years ago.

“I’ve been looking forward to being back open.

“All of the squads have been on Zoom sessions and we’ve still been doing coaching sessions.

“We’ve tried to keep everyone involved, but there’s nothing like practicing.”

Alec says that all of this summer and autumn’s competitions have been cancelled, but the club are looking to run their inter-club event in December to be followed by the annual Tulips competition in January.

“It’s great to get kids back active,” Alec continued. “It’s not just the physical side, it’s the mental side as well which the kids have been missing out on.”