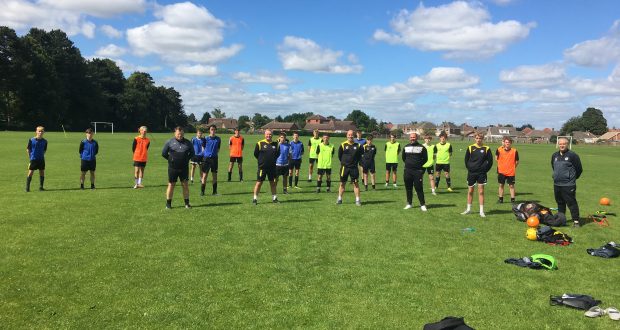 CLUB OF THE YEAR: Holbeach United are continuing to grow. Pictured at the front are Phil Barnes, Stuart Clark, Neal Collishaw and Andy Ferguson.

Holbeach United have celebrated being named Lincolnshire FA’s Grassroots Club of the Year by launching a new Under 18s side.

It will mean the club will now have two sides playing at that level and providing a bridge between its thriving junior section and its senior teams.

Due to the volume of players being produced through the academy, the club has decided to form another Under 18 side for the 2020-21 season.

Dependent on how grassroots football stands with COVID, it is the intention that the additional U18s team will play in a Sunday Under 18 league, with the existing Holbeach U18s team to carry on in the midweek Thurlow Nunn Floodlit League.

The midweek Under 18s management structure will stay the same for the coming season with Stuart Clark managing alongside assistant manager and coach Dean Elston.

The new U18 Sunday side will be managed by Andy Ferguson with help from Leigh Appleby and Ethan Kemball.

Clark commented: “Having seen the transition from U16 to U18s last year it is great news that we have the next crop of U16s wanting to make that transition to U18s and senior football.

“The aim is to integrate some of the new year one U18s from Andy’s team with our existing year two squad for Thurlow Nunn midweek football as well as giving them the chance to play both senior football and U18s on Sundays. It is crucial in having the year one players available for selection and for the longevity and growth of the senior set up.”

First team manager Phil Barnes said: “The formation of this second team is another step in providing football to the youth of the community and giving them a clear pathway into the Holbeach Senior set up, and will provide the opportunity for them to play for the Development, Reserves and first team sides.

“Once we get training underway it will be great to get all the Under 18s training alongside the senior players.

“Interest in the new team has been above and beyond the club’s expectation and they are all looking forward to the start of the new season.” 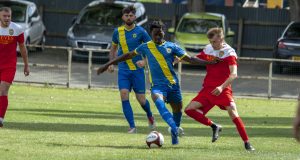