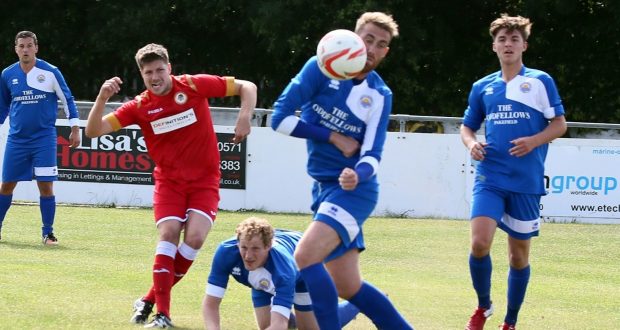 PICK OF THE GOALS: Spencer Tinkler netted a cracker for Holbeach. Photo by STEVE WOOD

Free-scoring Holbeach United smashed Division One side Long Buckby for six as they cruised to victory in the ChromaSport UCL Knockout Cup on Saturday.

Tricky winger Manny Salumu did bag a classy double for The Bucks on 45 and 89 minutes, but Holbeach – last season’s finalists – never really looked in any danger.

Player/boss Tom Roberts, who has now seen his side go unbeaten in six games so far this season, felt it was another positive outing for his side – who have no scored 21 goals in six matches this campaign.

“We picked up no new injuries, which is a bonus, and on top of that we saw some goals for the strikers, while Spenny and Nick also got involved.

“It was a shame to let in two goals, but I did feel that their winger was a threat. He looked a very sharp player and got two good goals for them.

“Apart from that they didn’t really threaten us that much. Fair play to them, though, they looked to be a good side and I wish them well for the rest of the season in their own league.

“Today was about us, we took care of business – and we knew that if we could do that, we’d win the game.”

With Holbeach naming a very strong side, Division One outfit Long Buckby would have been forgiven for starting with a defensive mindset.

But, to their credit, they started superbly well and Hossan Khorami tested Ricky Drury early on with a near-post effort.

The hosts went straight up the other end and went close themselves, with Tinkler forcing keeper Tom Bryce into a desperate save after nodding Jake Walton’s corner towards the top corner.

Undeterred, Long Bucky’s Dan Worton saw a goal ruled out for offside and Ed Kostiuk fired an effort off the base of the post as they set about trying to upset the odds.

That was as good as it got for the visitors, though, with the Tigers going ahead on 24 minutes. The lively Clitheroe go in behind the Buckby backline and rounded Bryce, before composing himself and expertly firing into the top corner.

It was nearly 2-0 instantly when Ford’s rasping drive was tipped over, before Buckby sub Knights unfortunately put through his own net on the half-hour to put Roberts’ side in command.

With the Tigers now purring, Clitheroe rattled the post with a deflected drive following a lovely team move. From the resulting corner, defender Jackson back-heeled home from close range to give the hosts clear breathing space at 3-0.

Moments later Clitheroe placed goal number four into the bottom corner, driving low across the keeper after Ford had been tackled when clean through.

Salumu, who was Long Buckby’s best player, did grab a goal back on 45 minutes with a fine finish in the near top corner after cutting in from the left, but Holbeach were full value for 4-1 at the break.

With a storm brewing off the field thanks to some spectacular thunder and lightning, Holbeach continued to pour forward after the interval.

A skilful turn and strike from Tinkler forced Bryce to save smartly at his near post, while Ford unselfishly tried to pass to a hat-trick hunting Clitheroe when he perhaps should have shot when clean through on goal.

Goal number five duly arrived on 49 minutes, however, and it was a cracker. Stacy Cartwright played a stunning long pass up to Clitheroe, who squared for Tinkler to lash home a cracking right-footed drive from the edge of the box.

Kostiuk hit the bar for Buckby following a flowing move at the other end, but it was Holbeach who scored next when Ford lobbed home a deserved six after beating the offside trap.

Another stellar finish from Salumu in the dying stages served as consolation for the Division One side, but failed to take the shine off another impressive Holbeach display.

On the evidence, they’ll take some stopping in a competition they’ve got unfinished business in after losing last year’s final on penalties.