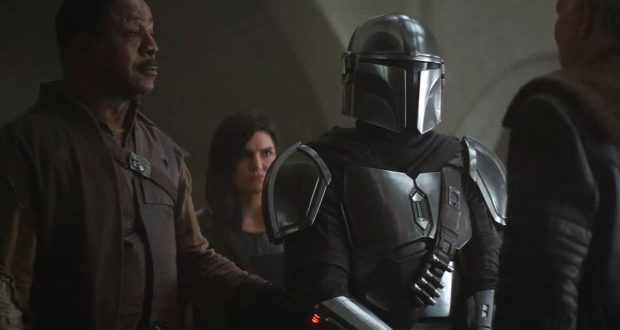 It had to happen sooner or later, but The Mandalorian finally showed its hand and got back on-track with the main story in Chapter Seven.

After a number of slowly paced side quests, The Reckoning put all of the pieces together and left us with a cliffhanger ahead of Friday’s season finale.

Although the slower paced chapters were largely enjoyable, it was great to see the true ramifications of ‘Mando’s’ actions come to light as we headed back to the planet where the series began. At this point, it should be obvious that mild spoilers of earlier episodes will follow.

From the off, we see that Pedro Pascal’s Mandalorian realises that he must head back to Nevarro – the place he rescued Baby Yoda from by blasting his way through Bounty Hunters’ Guild and putting himself in the crosshairs of an imperial type dubbed ‘the Client’ (Werner Herzog).

He accepts an offer to meet with Greef Karga (Carl Weathers), his former guild contact who he left for dead.

Sensing a set-up, he brings friends Cara Dune (Gina Carano) and Kuiil (Nick Nolte) – the two most memorable side characters we’ve met – along for the ride, too.

Without giving too much away, we are finally treated to the debut of Giancarlo Esposito’s Moff Gideon, who looks set to be a big player as we move into the final chapter and beyond.

His showdown with Mando and the crew promises to be a good one, with all of the key characters now moved into position.