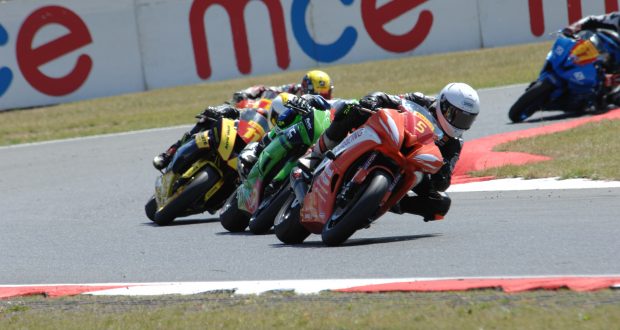 Clarke’s lapping up his return to action

Kirton’s Aaron Clarke was satisfied to improve his lap times as he returned to the racing fold at Snetterton at the weekend.

After missing the Knockhill round because of bike problems, the draperRACING team member was 10th in the Superstock 600 race and was invited to ride in the British Supersport race on Sunday where he finished in 12th place and was first in his class.

Due to lack of track time over the past few weeks, Clarke spent the free practice sessions reacclimatising himself with the bike and pulled out all the stops in qualifying to record ninth place and a place on the third row of the grid for Sunday’s 12 lap Superstock 600 race.

But, as the race got underway, Aaron was pushed back to 11th in the rush to turn one and then had to take avoiding action when a bike blew its engine right in front of him.

He ran wide to avoid the incident and lost a lot of ground in the process. He spent the remainder of the race playing catch up and had moved through to ninth place on the penultimate lap.

However, on the final lap, he hit a false neutral and lost ground once again to finish the race in 10th position.

Clarke said: “But for that false neutral I could have caught the two riders ahead of me and got up to eighth but it wasn’t to be.

“I did, however, improve on my lap times and was at least half a second faster than ever before.”

After the race, Clarke was invited to join the grid for a ride in the British Supersport Championship feature race later in the day.

He was at a disadvantage as the Supersport bikes are more powerful, but he decided to give it a go and see how he fared.

Starting from the back of the grid with another three stock riders, Clarke rode well to complete the race in 12th place and was the first of the stock bikes to cross the finish line.

The next round of the Superstock 600 is at Brands Hatch over the weekend of July 21-23.