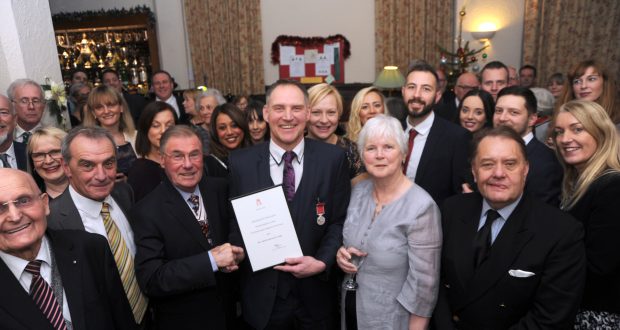 Mark Le Sage receives his Order of the British Empire Medal from the Deputy Lieutenant of Lincolnshire William Webb.

As birthday presents go, being given an Order of the British Empire Medal is right up there.

That’s exactly what happened to Mark Le Sage last Friday as he celebrated his 53rd birthday at the Spalding Club in Broad Street.

Mark, who is well known for his charity work and campaigning, received the award from the Deputy Lord-Lieutenant William Webb watched on by friends, family, colleagues and important people from his life, including his old form teacher from the Gleed School.

It’s in recognition for a host of work including with The Butler Trust worked on measures on rehabilitation for offenders in prison a sector in which Mark used to work in.

He’s now a nurse and also helped set up Ella’s Project after realising there was a lack of charities to donate his daughter’s old clothes to.

In recent years it’s helped causes such as the Syrian Appeal and for the victims of the Grenfell Fire in London.

At Friday’s ceremony Anthony Grunwell delivered a speech on Mark’s achievements before Mr Webb presented him with the medal and a certificate.

In a special surprise he was also presented with a gold watch by Bill Parker.

Mark said: “It was overwhelming really. I feel very privileged, very honoured and quite humble really.

“A few weeks before it was announced in June I received a letter which I thought was from the court and I didn’t want to open it.

“I was almost embarrassed to be fair as you just do what you do to help people, be they prisoners or those in my care or in need.

“It’s just wonderful really. I’ve been very lucky and fortunate to sometimes be in the right place at the right time.

“I was diagnosed late in life with dyslexia and I’ve had to work really hard.

“I’m very thankful for being supported by the Butler Trust and Sir John Hayes MP who supported the nomination.”

Elaine Gray and Joyce Holmes were in attendance at the event and former colleague in the health service, psychiatric nurse

Rebecca Robinson who nominated Mark for the award.

“We worked together and was aware of his charity work including with Ella’s Trust,” she said.

“He’s supported me, I’m a lone parent and he’s been there as a friend.
We’ve worked together and I also really admire his work with the Butler Trust knowing everything he’s been through personally but he’s always there to give to other people as well.”